Recently I’ve become really interested in letterpress. It’s basically a form of printing on a movable type machine that results in a print that’s sort of embossed as well. I recently bought a set of cards from Vince Letterpress: 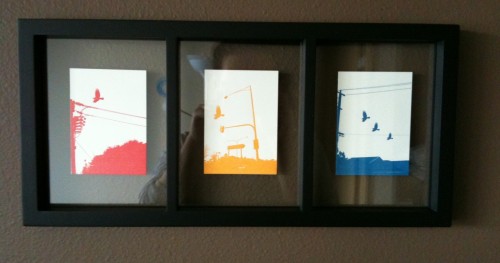 Meaghan was really nice because she had originally sent me two blue cards and a yellow. I told her that I had intended to frame them as a set of three and she printed a red one and sent it to me for free. It was really good of her to do that.

I think the reason I like Letterpress is that it leaves a very tangible impression. The object itself is a representation of something that’s not quite 2d, but not quite 3d either. In an age of all things digital, when it’s so easy to reproduce something by printing it out on an inkjet or laser printer, it’s nice to have something that’s a bit more difficult to recreate. Sure, someone could scan the card and print it out, but there would be something lost in the translation from a physical object with physical properties to a digital representation back to a physical object.

So far my hobby consists of collecting letterpress’ed stuff. I’d really like to take a letterpress printing class some time. It seems like it’d be a good way to balance my love of new technology with some older-fashioned tech.