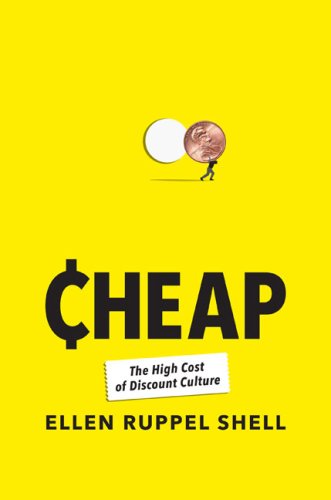 I recently picked up a copy of Cheap: The High Cost of Discount Culture. As a self proclaimed cheapskate (I picked this book up from the library, after all!), I was very interested in the subject. Ellen Shell does some in-depth research behind the psychology of why we (humans) love cheap stuff. Some of us go bonkers finding good deals, even when it’s not really economical (driving miles to save a few cents on gas). I’ve displayed this behavior in the past, buying videogames when they’re on sale while never having enough time to even finish the ones I’ve started, let alone the new ones I bought. I’ve chilled out a little when it comes to randomly buying stuff, but the allure of a good deal is still strong.

There are also some fun experiments described. Like the one where a person is presented with a crappy Hershey’s chocolate for 1 penny or an upgrade to a premium chocolate for 25 cents. Most people pick the premium. But when the price of the Hershey’s drops to the magical price of “free,” most people go for the free option instead of the “better” 25 cent deal.

Shell also describes the history of the discount store. Originally goods were priced according to quality. It was easy to tell that something made well cost more. But people started selling crappy quality goods at super low prices (and thrive on volume). This caused the more expensive sellers to go out of business. The super low prices made poor people feel like kings, being able to afford new socks instead of repairing their old ones! People could afford to just buy new things, which was good because the new stuff they bought would fall apart pretty quickly (think H&M).

The basic thesis of the book is that people love cheap things, but cheap things come at a cost. The lower class will always be involved (and basically abused), because if you paid people well to make things, the things themselves would need to cost more. This means that working retail sucks. It also means that the conditions for the people making the cheap stuff (mostly in China and Vietnam and other poorer countries) sucks really bad. If people saw what their need for cheap led to, they would probably be willing to pay a bit more to improve the quality of life of the people making their things. Sadly, most people don’t think about it because it is very out of sight.

One interesting section of the book concerned Ikea. I’ve always really liked Ikea because they make fashionable stuff and it is, indeed, cheap. I’ve had issues with their “stainless steel” items from China that rust like the surface of Mars. Overall though, I have a lot of love for their furniture. Learning that they use a hella lot of lumber and their “planned obsolescence” mentality leads to waste makes me reconsider. I’m not sure they’re the devil, but I think that next time I need to furnish an apartment, I may instead think of Crate & Barrel (which has way cute stuff!).

As for getting rid of my own cheap habits altogether, I don’t think I can do it. I will say that I am lucky to have the luxury of being able to choose to spend more or not. I don’t shop at Wal-Mart because I think it’s kind of evil and exploitative. One interesting thing to note is how well Wal-Mart does during a recession due to its focus on crazy low prices… I do shop at PCC because it’s good quality food and Michael Pollan says I should spend more on healthy food. I can’t really justify paying more just for the sake of paying more, however.

The book closes with a story about a company that goes against cheap culture. It’s a grocery store that focuses on customer service instead of price. People really love the store and are willing to pay more because of it. The store actually has fans. I think this is a great example of competing on another factor and really kicking butt doing it. I think that other companies that do this are Apple (for selling high quality products that people develop emotional bonds to) and Zappos (for focusing on customer service above price and making customer happiness their main goal). There is a special place in our brain that loves cheap, but I think there are also other things that are important to people.

Cheap: The High Cost of Discount Culture is a really interesting look at where we are and how we ended up this way. It says something interesting about our culture, our brains and ultimately our nature. If you buy just one book this year, then Cheap is probably the book for you! (It’s on sale at Amazon! 35% off!)

« The Bird and The Bee – My New Favorite Band! New Hobby: Letterpress »