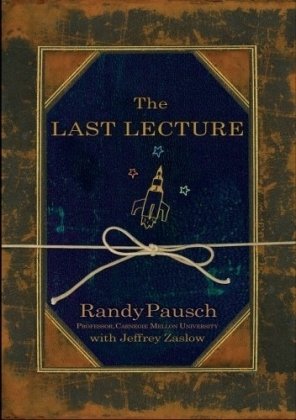 I grabbed the audio version of The Last Lecture onto my iPhone a while back for a long car trip, but in typical Hung Truong fashion I didn’t take advantage of my over-preparedness. Recently I’ve been riding the bus a lot, and I recently took a series of long flights, so I had a chance to listen to the whole book over a span of a few weeks.

Randy Pausch’s story is pretty interesting. He was a professor of Computer Science at Carnegie Mellon who was diagnosed with pancreatic cancer – not the most survivable. His diagnosis gave him 3-6 months, and for his “Last Lecture” he showed people how to live their childhood dreams. The video really caught on! I watched it quite a while ago and it really is incredibly inspiring. You can see it here.

The Last Lecture: The Book, goes into further detail on things that Pausch touched upon during the lecture. It’s a more thought-out version that makes sense as a book, since a four or five-hour lecture might be a bit rough on the audience. Randy’s main points are that if you try hard enough, you can get what you want. Persistence pays off. Enabling others to succeed is often more rewarding than serving yourself. Throughout his life, Randy got to do all sorts of stuff that he dreamed about since he was a kid.

Maybe it’s a product of having a one-sided view of Randy’s life, but it seems like this dude is a total saint! He even jokes about it in the book. I personally think that he probably was a really awesome person who deserved everything that he worked for. While it really is sad that he died, he crammed in a bunch of cool stuff in his life! To his credit, he says in his book that the thing that bothered him the most was that his kids wouldn’t be able to grow up with him as a presence. It’s really wonderful that some people can be so selfless, even when they have a very limited time limit.

I think we all need a reminder sometimes that our time is limited. In some cases, it can be extremely short. One thing that I have struggled with, given the reminders I have had that life is short, is that I really get antsy when I don’t feel like I’m moving forward. I can appreciate that patience is a virtue, but I also think that being proactive is one of the best things a person can do for him/herself.

I often think of my lifespan as a progress bar (think a file transfer dialog box or something) that is always moving towards 100%. But you can’t see how close you are to 100% (unless you’re Randy). So how much of my life would I like to spend unhappy? 1%? That’s more than a year, if you assume <100 year lifespan. Oh, I guess I’m not really reviewing this book anymore, am I? One thing I noticed about the audiobook version is that it’s not Randy reading the book to you. This makes sense since I’m sure Randy would have rather spent the studio time doing stuff with his family. But it’s also kind of weird listening to this dude who isn’t Randy talk about all of his awesome life experiences. Maybe they could’ve just recorded all the possible syllables Randy could make, then piece them into words and sentences? Nah. Anyway, The Last Lecture is a really nice companion to the actual last lecture. It puts things into perspective. I personally strive to make the most out of every day. I hope I have a lot of quality time left doing the things I love. But if I don’t, at least people will know I made the most of it!