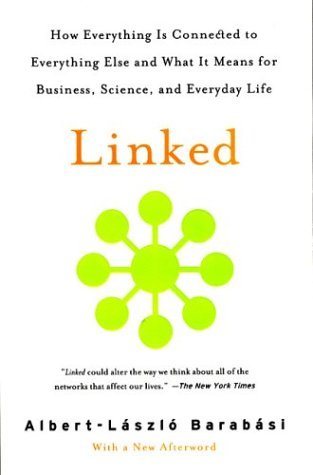 It looks like I’m continuing my long list of book reviews on my blog. Here’s a review of Linked by Albert-LÃ¡szlÃ³ BarabÃ¡si (yes, I copy-pasta’ed that).

Linked is the story of the birth of graph theory and how early network models evolved to how we understand them today. Barabasi does a really good job of inserting character and context into the early scientists that formed the early ideas about networks. For example, he introduces Euler with a story about how he gave his nephew some lessons and worked on calculations that would some day lead to the discovery of Neptune. Oh, and he died that day, never to see the fruits of his labor. This kind of narrative is what I found lacking in Connected, and the kind I also noticed in Six Degrees. Go Barabasi!

That isn’t to say that Barabasi isn’t the king of all prose. One bugaboo I kept running into while reading linked was that Barabasi seems to have a certain idiosyncrasy in his writing. To be blunt, he starts too many sentences with the word “indeed.” I’m not sure if anyone else has noticed this, but in some paragraphs he uses “indeed” twice! I think the max number on a page was three. I have taken the liberty of documenting one of these pages: 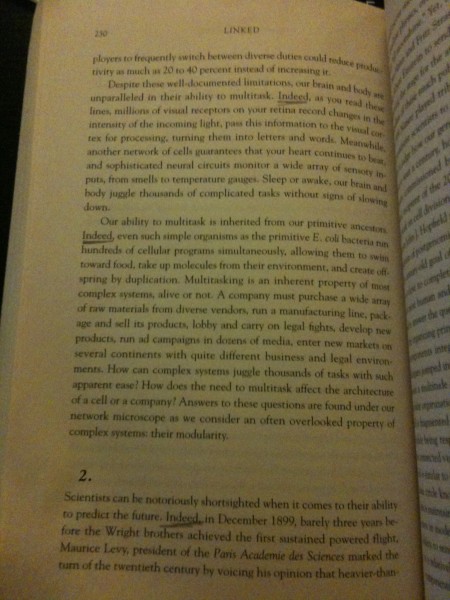 Please note that this doesn’t mean I don’t like the book or Barabasi’s writing. Indeed, I just complemented his writing earlier in this review. I just think his editor needs to help him with a larger vocabulary.

Besides that pet peeve, I thought the book was really well written and interesting. It had my attention up to Barabasi’s discovery of scale-free networks and the near-ubiquity of them in other systems. The book started getting a bit slow around the 13th chapter when the subjects were biology and business. I’m not sure if I was just scale-free fatigued or what.

I feel the book was not balanced enough. The beginning, which consisted of a lot of history, was much more interesting than the explanations of how scale-free networks seemed to pop up everywhere. While it is a key takeaway that many of these observed properties of networks seem to be universal, it also isn’t as interesting as evolving a model of network analysis. I guess this isn’t really a fault of the author though. Also, this book was published in 2002, before many of the popular social network websites became super popular. I just looked up Barabasi on Amazon and it appears he has a book due out this year. Sweet!

I think that I can safely say that I enjoyed Duncan Watts’ book more than Linked. But it also isn’t a fair comparison because I read Watts’ book first and much of the content of both authors overlaps, so I may have felt that reading Linked was redundant. Linked came before Six Degrees, so maybe a lot of Six Degrees’ success has to do with Barabasi’s book. Either way, both books were good. I’m glad I read both of them. Now that I discovered the existence of a second Barabasi book, I can look forward to reading it in April.