Mindset: The New Psychology of Success 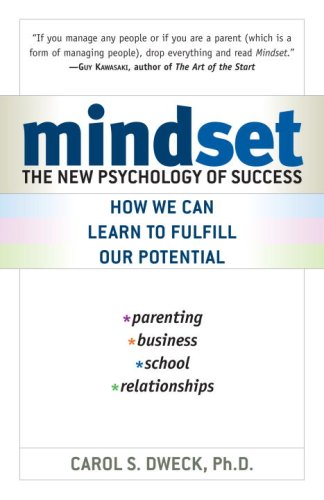 A while back I wrote a post about rejection and how I dealt with it. I also mentioned a book that I had on hold at the library that seemed kinda related. I got the book and read about half of it. Then I got really busy and had to return the book. After putting it on hold again and getting it back I finished it. So here’s my thoughts (I’m totally a completist so I really have to read the ENTIRE book before I count it as finished).

Mindset: The New Psychology of Success, has a really simple message behind it. Depending on your perspective, or “mindset” on life, you can really affect your own learning and personal growth. Basically, people with a “fixed” mindset believe that a person’s qualities are predetermined and set in stone. So people who are good at math won’t fail and those who are bad at math will never be good at it. Conversely, people with a “growth” mindset will understand that with practice and reflection, people can improve in just about any measurable quality. They see failure as a challenge and thrive on improving themselves rather than proving their superiority. (quick anime example: Rock Lee is totally growth and Sasuke is totally fixed)

I suppose I’ve been trying hard to adapt to the growth mindset, even before reading this book (see this post for more on that). Previously I think I probably did have a sort of fixed mindset in that I felt I was pretty smart and got through all of high school fairly easily. In college I stumbled a little bit because Computer Science forced me to think in ways I wasn’t used to thinking. I came into an intro course that had hundreds of students of which, by the end, only a fraction remained. I made friends with a guy who had programmed all his life. Another one of my friends had never programmed before. The experienced guy did well on talent, my other friend dropped saying it was too hard and I had to work really hard to keep up. Though at the time I felt a bit inferior to everyone else because I actually had to study hard and struggle, looking back I’m really proud of what I accomplished. Computer Science courses basically taught me that with hard work, I could understand really complicated problems and work out solutions.

As for the book itself, It’s very easy to read. In fact, I think it might be a little too easy to read. I think I spent too much time in the past two years reading nothing but academic papers. While I appreciate the colloquial language of the book, it feels sometimes like I’m being written down to. Also, some of the examples and suggestions seem really cheesy, for lack of a better word. Example: If your child displays a fixed mindset, turn dinner into a conversation on how each family member learned something. Soon the kid will be policing you and making sure you show a growth mindset! Sounds like a scene from Family Circus (not the Nietzsche version).

I’d also have to say that the first few chapters really contain the meat of the book. They explain the two mindsets, give examples of each in action and spell out how each one affects a person’s outlook on learning and growth. After the third chapter or so, the book just goes into examples of the mindsets in different contexts: sports, business, relationships, parenting. A good deal of these chapters feels really redundant and a little boring, honestly. I guess they’re useful in reinforcing the ideas, but not completely necessary if you actually read the first three chapters. The last chapter is a workshop of sorts for changing your own mindset. I’d say it’s worth a read as well.

Overall, I think the book is an interesting read and the concepts it introduces have a lot of potential. I wouldn’t label the book as self-help; it’s more of a psychology book that you can actually apply in your own life (sort of like Stumbling on Happiness). At the very least, it’s made me more perceptive of how I react to situations as well as how others around me react.