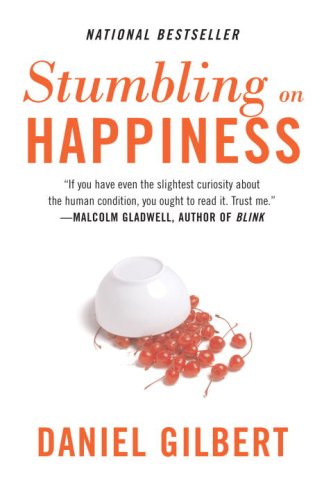 One of the things I’ve rediscovered in Ann Arbor is a place from my childhood. A place where you’d go in elementary school to go look up facts, and perhaps even borrow a book. And you didn’t even have to return it! Ever! That’s right, in my short time here, I’ve already rediscovered libraries.

I dunno why I forgot about them. Probably because the libraries in New Mexico aren’t as good as the ones in Michigan? My local library of choice here is the Ann Arbor District Library.

This library has like everything. Books, CDs, DVDs, Books on CDs. Soon they might have DVDs on Books… I found that the library had a lot of things that were on my Amazon.com wishlist, too.

And Stumbling on Happiness is the book I’m going to attempt to review.

Despite the title, Stumbling on Happiness is not written by Dr. Phil, as my friend Adam Torres presumed. It’s written by some psychology professor from Harvard. And it doesn’t explain how to become happy either! It sort of explains why people think they’re doing things that will make them happy, but end up not being happy.

“So why did you read this, Hung!?” You might ask. Because knowing what makes people unable to become happy might provide a clue on how to actually become happy. And plus I already checked out the book, and it’s due on Tuesday, so…

The general style of the book is fairly analytical, but also sort of explained in terms that normal people can understand. There’s also quite a bit of humor involved, which makes the seemingly dry task of figuring out the definition of “happiness” a bit more gratifying. One chapter starts off, “The last decade has seen an explosion of books about poop.” This is my kind of writer.

While I don’t agree with everything the author says, he does use lots of real case studies and examples. Some of which seem cooked. But the main point is quite clear. People can’t predict what will make them happy because their brains aren’t really equipped to make such a prediction accurately. It’s sort of this fight against your brain’s natural reasoning capacity, and you’ll always lose.

At the very end, Daniel Gilbert offers a way to escape this mental trap: phone a friend. It only works if the person is presently in the exact situation you want to be in, however, since human memory is really messed up. So really the solution is more of a cop-out. Even though I do ask people for advise a lot, I still get the feeling they are far too removed from my personal context to be accurate forecasters of my future self’s happiness.

Overall, I did enjoy the book, thanks in part to the wacky humor. Though it could’ve contained a lot more. Stumbling on Happiness shouldn’t be taken as pure fact. In healthy doses, however, I think the ideas and advice within might actually prove useful to those in search of happiness. Which is like, everyone?

« And So Ends the Great Experiment… An Uninvited Dream »