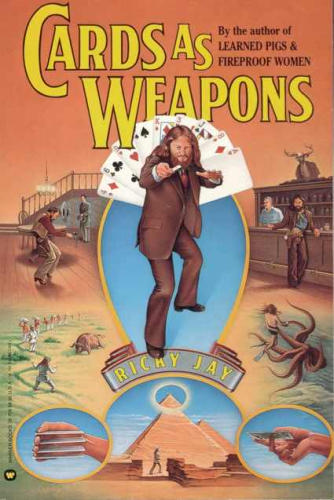 I had a dream that I was in prison for some reason. I guess the reason is irrelevant. I imagine I was innocent and was unfairly accused of committing some crime. Anyway, since weapons are not allowed in prison I decided I would carry a pack of playing cards around and I’d the use cards as some kind of shiv if I got into a tussle.

I think the idea originates from when I read about a book (I think this was in some kind of magician’s manual) that explained it was possible to get so proficient at throwing cards that one could, if thrown with enough velocity, lodge a playing card into a watermelon. I’m not sure if this is even really possible. I should look it up or ask it as a reference question to a librarian.

Okay, after a brief digression, I found the book: Cards as Weapons. But apparently it’s just a hoax/parody. Oh well.

Anyway, back to the dream. As expected (think about Chekhov’s gun), I eventually got into a major prison fight using cards (my opponent also used cards to fight back). We actually fought with two cards in each hand, sort of knife style or something. The prison guard broke up the fight and had to punish us. This is where the story gets interesting. He used the face value of our cards to determine how severely to punish us! I have to hand it to my dream guard, he sure knows how to make things interesting. Is that just me complementing my own subconscious? I don’t know.

The guard was gonna add up the value of the cards we used as weapons and probably put us in “the box” for a duration of time appropriate to the value of the hand. Or something. In the middle of the guard figuring out the value, I woke up. Good timing, I think.