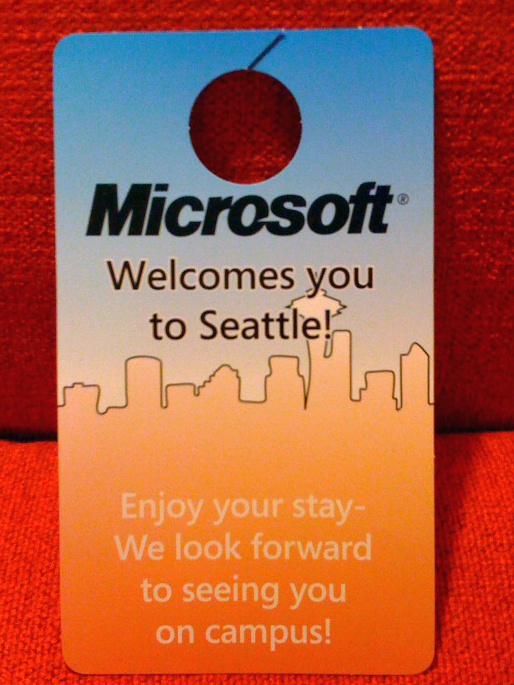 I have been noticeably absent in this blog and others this month. So in typical Hung Truong Blog fashion, I felt like I should write about what’s going on in my life, including my everlasting job hunt. I know some have gained quite a lot of pleasure in reading about my various job hunt activities. Job hunting is kind of fun, especially when you’re in school and you don’t actually have a dire need for a job (well, I already have a job, but I know it’s gonna run out when I graduate).

Anyway, last weekend I interviewed at Microsoft for a Program Manager position. You might recall that I interviewed with Orbitz a few weeks prior. I got an offer from Orbitz and let the recruiters at MS know. Then the MS recruiters hurried up the process and let me interview with them. Pretty cool! I ended up declining the Orbitz offer (but it was awesome and I would have taken it if I hadn’t gotten a better offer, more on that later).

Um, I realize at this point that in the interest of actually getting a job, I should be neutral when I talk about companies. Luckily, all of the companies I’ve dealt with so far have been class acts. So I don’t really need to hold anything back. They’ve been awesome. The whole experience of job hunting has been a real eye-opener for me. From exploding offers and figuring out offer goodness, I’ve been learning a lot.

So anyway, I flew to Seattle and got there at around 11am. I got a rental car (a Toyota Highlander SUV) and drove to the Pike Place Market, which is apparently one of the really cool places to see. I got lunch there and wandered around various shops. Then I decided to go to the Seattle Library, which is really super awesome. And being a student at a library school, I knew I needed to check it out. The library had multiple floors of awesome. The decor in there is like Ikea, except cooler! And it’s in a library!

On my interview day, I tried leaving early but it took me a while to find Building 19 (the HR building) where I was supposed to meet with my recruiter. Microsoft campus is huge-ass. I was a little late. 19 is probably the spiffiest building I encountered, with its sorta dim lighting (for mood), Microsoft Surface to play with, and Rock Band! There were a lot of other students there waiting for their recruiter to get them. They all seemed kinda nervous. It was hard to get them to even acknowledge I was trying to joke around with them and get a posse to play. Then, I was about to start a song when my recruiter called my name. Ah, well.

From 10-4 it was interviews. They were each an hour long, except for a “lunch” interview which lasted 1.5 hours. And I had 30 minutes to sort of pass out after lunch before the final two interviews. _Note to people looking for info on questions they ask in Microsoft interviews: don’t bother. I’ve noticed that a lot of people find my blog while they’re looking for interview questions to prepare for their own interviews. The thing that people don’t understand is that everyone asks different questions. And you don’t need to know the answers beforehand anyway. The whole point of the questions is that you answer them on the spot, and that the process of answering the question is what the interviewer wants to see. So if you knew the answer already, you might do worse in the interviewer’s eyes because they’d be like, “what the heck? This person doesn’t think!” Also, most of my questions were about me, so you’d have to do a lot of studying about Hung Truong if you wanted to ace my particular interview questions.

The interviews themselves were thoughtful and pretty cool. The people interviewing me were really smart and all seemed like cool dudes to work with. I mean, as a self-respecting geek I know that Microsoft has a certain reputation for software. The thing is that a company as big as Microsoft will inevitably have great products and not-so-great products. Also, I read this article in Fast Company about Gary Flake, my new(est) role model! MS is finally entering the web space like they mean it and it’ll be interesting to see how they approach it and how it will affect the other big players (Google and Yahoo… to some extent).

Finally, I had a chance to have dinner with a current MS employee. I chose my former classmate, Sameer. He and his wife took me to the Space Needle Restaurant, which was incredibly touristy and awesome. Oh, and expensive. Thanks for footing the bill, Microsoft! Seriously!

I know that most of my job hunt posts end in some kind of failure post (example 1, example 2, example 3, example 4, etc). I’ve gotten pretty used to rejection over the past few years. But! It seems I’ve gotten better at interviewing! For I got an offer! I can’t (and probably shouldn’t) disclose certain things, so let’s just leave it at that. I have about a week to make my decision. I will probably make another post when I do make a final decision. And then we’ll finally have a proper burial for my series of job hunt posts, once and for all (or at least hopefully for a while!).

« Sonny Stitt: Just In Case You Forgot How Bad He Really Was The Semi-Annual Post-Finals Bad Dream! »