Facebook just recently released a fun new thingy called Lexicon. It shows you a graph of the occurrences of certain words or phrases over time on all Facebook walls. Since I do quite a lot of research using Facebook, I thought I’d take a look at it.

Facebook has some suggested phrase pairs that you can use such as “party tonight” and “hungover.” And as expected, the phrases are cyclical and you tend to see a spike in “hungover” the day after “party tonight.” But it’s worth noting that you can’t prove causation by just correlation.

What’s a little strange is that there doesn’t seem to be any growth going on in Facebook. Maybe they’ve normalized the data so you can spot trends, but you’d kind of assume that word counts would trend towards going up since Facebook is still supposedly growing. Or is Lexicon telling us something Facebook doesn’t want us to know about their growth?

Anyway, at least one question of the ages has been put to rest. According to Lexicon, shampoo really is better than conditioner. STOP LOOKING AT ME, SWAN! 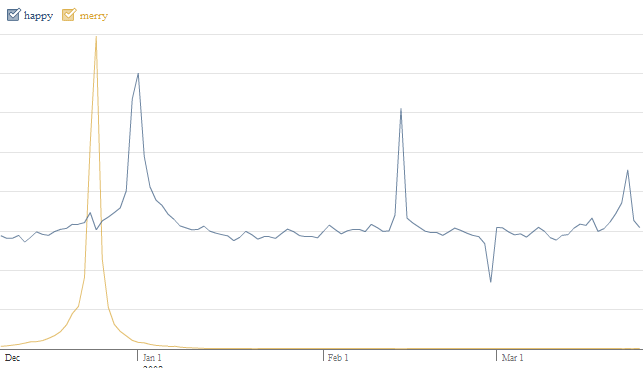 It looks like the word “happy” is used more on holidays like New Year’s Day and Valentine’s Day. But the word “merry” is kind of exclusively used on Christmas. See that strangely unhappy day near the beginning of March? Since it’s a leap year, Feb 29th was included in this graph. And since less people statistically have birthdays on that leap day, the word “happy” was recorded less. Pretty neat stuff, huh? I’m sure there’s other fun stuff to dig out of Lexicon, if you were really inclined to.

« Muxtape: Bringing Back The Art of The Mixtape Observation: Bus Driver Camaraderie »