A Tale of Two Facebook Apps: Viral Vs. Non-Viral Growth

For my SI 508 Networks class last semester I did an analysis of one of my Facebook applications, Notecentric. Notecentric was a social network that I had written during the Summer of ’06 and I had recently ported it to the Facebook Developer Platform in Summer ’07 shortly after the platform had been launched.

The growth of Notecentric isn’t what I had hoped it would be. Not too many people use it, probably due to network effects of Facebook promoting a competing app (note to Facebook: if you want to promote a level playing field, don’t play favorites!) and other general performance issues (the application is pretty barebones and the RFacebook library I used to write it is pretty damn slow. It times out a lot!). Anyway, I got some neat network data from it, which made the whole thing worthwhile. You can check out the original paper I wrote last semester here.

I’m going to be presenting my analysis during the School of Information’s annual expoSItion. It’s like a science fair except without the exploding volcanoes. During my Winter break, I developed another app, mainly for fun. It’s called Musical Instruments. Basically it lets you list which instruments you play and see which instruments your friends play. I had somewhat higher hopes for this application as a data gathering tool, and sure enough, it seems to be doing some cool stuff on first analysis. For expoSItion I figured I’d grab some data from this new app and compare the two.

This is an initial view of the Notecentric network: 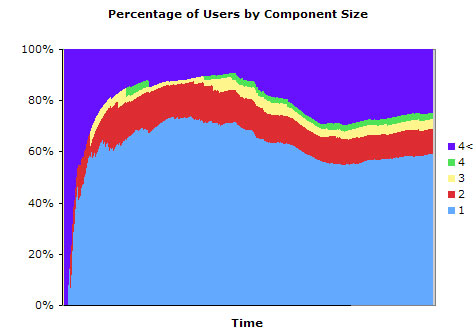 The singleton users make up about 60% of the total users, more or less, during the evolution of the application. This signals to me that Notecentric was never really that “viral” in nature. People didn’t think the application was cool enough to invite their friends and people who saw their friends add the app didn’t feel compelled to add it themselves. Fair enough; it’s a pretty nerdy app. I mean, who wants to take notes on Facebook!?

Here’s a picture of the Musical Instruments application network: 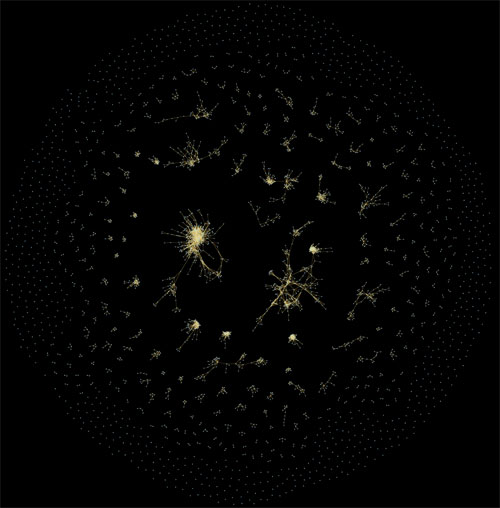 It’s pretty small, so click on the image for a bigger one. This one is pretty neat. Instead of just two large strongly connected components, there’s a whole bunch! One is obviously bigger than the others, though there are quite a few clusters of users. It’s a little unrealistic to assume that this network would form into just one strongly connected component since Facebook users are generally decentralized and musicians can come from anywhere. If I did more analysis, I’d imagine that these components correspond to physical regions. Sure, there’s that “join this group if you’ve played music with someone in it” group, but I’m sure that’s not even a strongly connected graph! 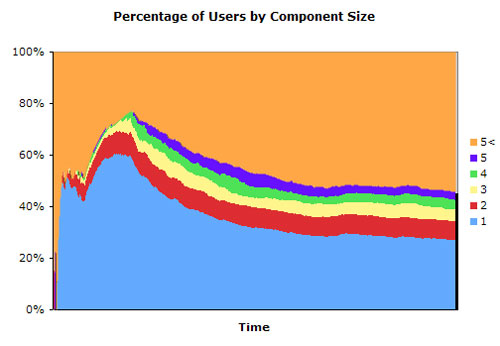 The growth of the Musical Instruments application is interesting. It follows the same sort of domination of large components (possibly due to me inviting all of my friends) but instead of letting smaller components take over, the large (size 5 or bigger) components eventually stabilize at somewhere like 55% or so. This indicates to me that the Musical Instruments application is actually better at viral growth. People seem to invite their musical friends and others want to add the app if they see it on a friend’s profile. This is also the impression I’ve gotten from the add statistics available from Facebook.

Overall, it’s fun to see how the differences in application usage contribute to the kind of growth that each application sees. Notecentric has been stuck at around 670 active installs for a few months now. Compare that to Musical Instruments, which has been growing by around 20 users a day, and has around 2,700 so far. The growth of Musical Instruments is by no means monumental, but it is seeing some success due to its sharable nature.

I’m planning on showing the images that I’ve posted and perhaps some fun statistics that show the differences in the growth of the two apps. I think I’ll also load up GUESS on my laptop so people can check out the two networks in a more interactive setting. There’s prizes for the expoSItion of $750, $500 and $200 for first, second and third place, respectively. There’s also a $500 and $250 prize from Microsoft for entries specifically in Social Computing (which my project should qualify for). So hopefully I’ll make a few Benjamins for my work!