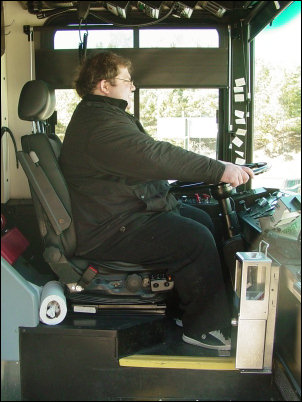 One thing I’ve noticed during my bus-riding career is that bus drivers have a really strong sense of camaraderie. Like, if a bus passes another bus, the bus driver might honk or wave at the other driver. During my days at UNM, this was pretty common since the busses took a circular route, and so it would make sense for a bus driver to say hi versus ignoring his/her co-worker. It was even pretty common for drivers to open up their windows, stop the bus, and start a little chat. This was kind of annoying since I was usually late for class.

I think the camaraderie doesn’t end by just affiliating with the same university. I was riding the blue Michigan bus to work the other day and I noticed a cross-bus encounter! The school bus driver was talking to the city bus driver across busses! So this must be a really strong link between bus drivers of all types, regardless of employer or bus model.

If anyone can shed light on this phenomenon I would greatly appreciate it.

P.S. I spell the plural of bus “busses.” Technically, it’s correct. It’s like the British version or something.