Back in the Spring of 2005, I took an intro to video game design and programming class. While I had a pretty good background in programming, I hadn’t done the kind of stuff for video games before. The first assignment in the class was to come up with some kind of game concept that would end up being a project for the class.

I really love RPGs, and the more offbeat they are, the better. One of my favorites is Earthbound for the SNES. I also dig the SRPGs from Nippon Ichi like Disgaea. Originally I wanted to do a Strategy RPG in the setting of campus life. It was called “UNM Tactics!” The whole SRPG thing didn’t turn out so well, and in the end, we made a generic style university RPG instead.

We kept the name as UNM Tactics, even though it wasn’t really a tactics type game. We used RPG Maker XP, which is a really easy to use frontend system for, well, making RPGs. After pulling a few all nighters, we finished the final presentation, and as a pleasant surprise, I got an A+! After the class, I sorta forgot about the game, but I was reminded of it after watching that movie, College Saga.

UNM Tactics is an RPG set at the University of New Mexico. It was created by a team of programmers and artists for CS 491: Intro to Video Game Development. While a working demo was created, the game was never fully completed. This game is the demo that was used for the final class presentation.

You can download the game here if you don’t want the story to be spoiled. The game comes in a self extracting executable. You just need to run it and point it to an output directory. Then run the “Game.exe” file and you’re good to go! The game should run on any Windows system, though I’ve only tested it on Windows XP. Use the contact form if you need some support. 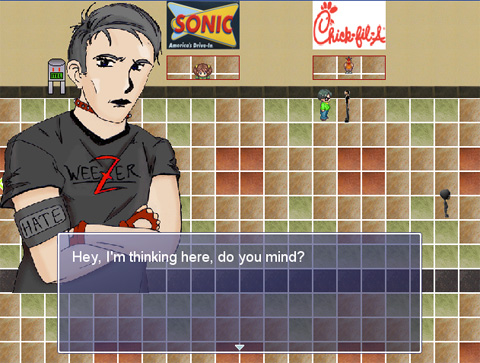 This is the SUB, or Student Union Building. I made all of the tiles by hand. Well, in Photoshop… This screen is right before you fight the Emo. You need to fight the Emo to get a Chicken Burger for the ITEL system so you can pass the semester. Yeah, school is complicated… 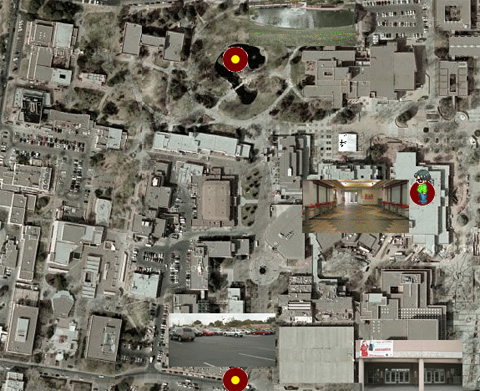 This is the overhead map. We just copied and pasted from Google Maps for the UNM area. Everything’s where it’s supposed to be, though! You need to press space on the bullseyes to get enter that area. To the North is the duck pond. To the South is South Lot (duh) and the bookstore. 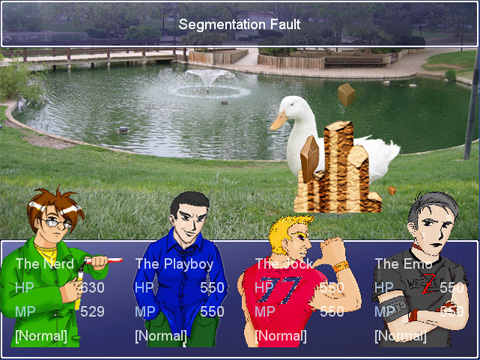 This is the battle screen. The Nerd is using his special power, Segmentation Fault. This attack has the elemental power of “math,” which thugs are weak against. You’ll also notice that the Emo has joined the party. His special move is “cut self.” 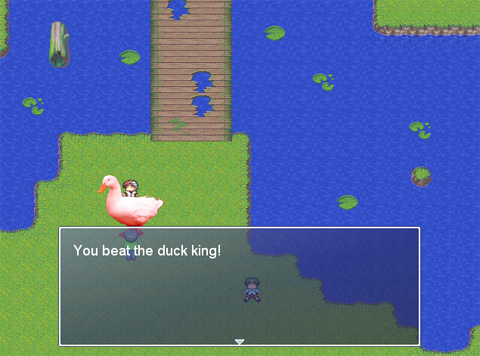 This screen is from one of the missions. You need to fight the King Duck who has taken over the duck pond. He’s based on a real life goose who runs amok at the UNM Duck Pond. If you ever see him, watch out! 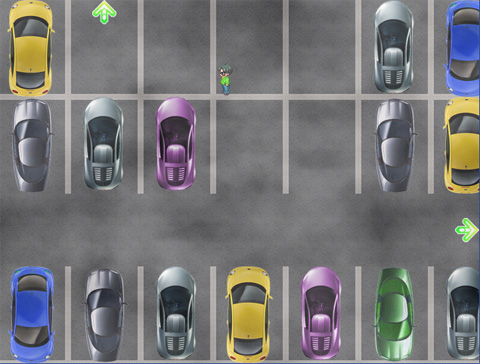 Originally I wanted to make South Lot like the lost woods in The Legend of Zelda. This proved to be too much work, so I just made it a couple of screens. Yes, there are only like, 3 kinds of cars at the lot. And yes, those are DDR arrows pointing you to the next screen… 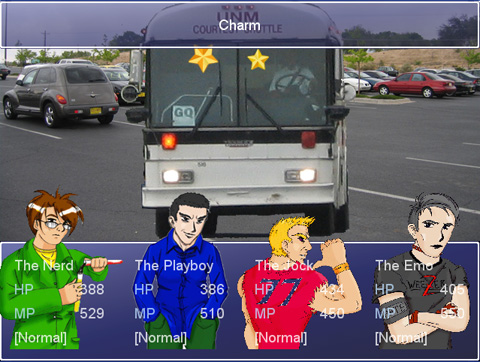 Here’s the battle with the malfunctioning South Lot Bus. If you look closely, you can tell that it is in fact the G and Q Lot bus. Also, the background of the battle is the Q Lot. You’ll also notice that there’s a bus driver in there. He’s actually a pretty cool guy. The radio stations that Wesley picks are always the best. 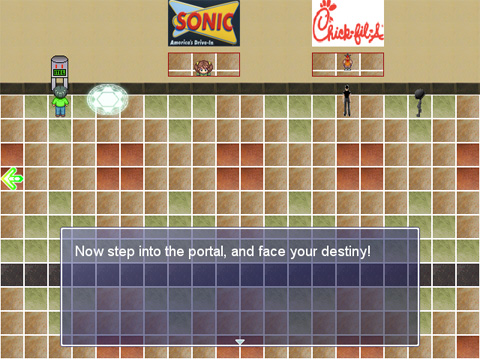 After you complete all of the missions in the demo, you get to fight the final boss. I won’t spoil it; you’ll have to beat the game yourself. Also, check it out, the Emo is back at Chick-fil-A, even though he’s in our party! So much for bug testing…

While I did a whole lot of this game, I didn’t do all of it. Here’s some credits!

The Alien and Emo Models:

Funny story: All of the characters are supposed to correspond to one person who was in the game. The nerd is supposed to look like me, Anthony is the playboy, Robert is the jock. The emo character is some guy in our group who really did go emo and dropped the class. Go figure.

Overall, UNM Tactics was a lot of hard work, but I’m fairly proud of the finished product. Feel free to download it, play it, and share it. Just don’t charge money or pay for it. Like anyone would pay for this…