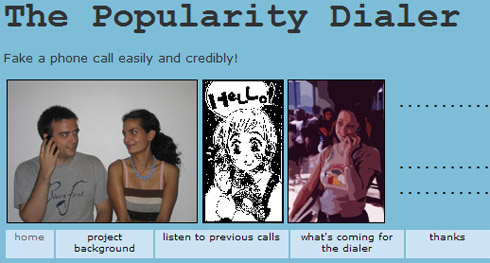 Maybe you wanted to look extra important or popular on that hot date. Or maybe you just needed an excuse to escape from an unpleasant meeting.

With “The Popularity Dialer”, you can plan ahead. Via a web interface, you can choose to have your phone called at a particular time (or several times). At the elected time, your phone will be dialed and you will hear a prerecorded message that’s one half of a conversation.

The idea is that people will think you’re really important or busy. While this might work for avoiding people, I have a feeling it won’t make you look cool on a date. Aren’t there enough asses that take cell phone calls at inappropriate times already!?

Someone needs to combine this with the previously mentioned Samuel L Jackson call. Can you imagine how important you’d look having SLJ call your cell phone? He’d be like, “Whassup, I being attacked by ninjas right now. You got my back?” and you’d be like “Hell yeah, Samuel J!”

« Get A Customized Message From Samuel L Jackson! For Snakes on a Plane! New Threadless T-Shirts That Don’t Suck! »