Fighting The Common Cold With Cold-Eeze! 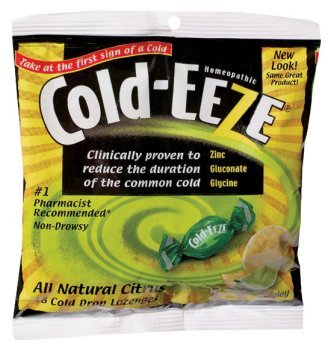 On Sunday night, my throat felt somewhat congested, so I figured I was catching a cold. I wasn’t going to just accept it without a fight!

Cold-Eeze is like a cough drop, but it has some special Zinc ingredient in it. From my understanding, the Zinc coats your throat and prevents the cold virus from replicating. One note: the stuff tastes really gross, and it sort of stays in your mouth long after the lozenge is gone. Imagine eating the peel of a banana. Kick it down a notch and you have Cold-Eeze.

Last time I had a cold, I tried using Cold-Eeze to decrease the length of it. I used it the late in day after I felt like I was getting sick, so I ended up being sick for more than a week.

This time, I took it right away, even before I was sure that I was sick. Today, Thursday, I feel about as good as I did on Sunday. I’m definitely past the hump. In my experience, I’ve had colds that have been a lot worse (I didn’t really feel all that sick during the worst days, Tuesday and Wednesday) and they’ve lasted a lot longer too.

Yes, I graphed my sickness levels with gnuplot. I’m a nerd.

I wouldn’t say that Cold-Eeze cures anything; it just makes your cold shorter and weaker. Even if you’re skeptical about it, I’d say it’s worth it to have some lying around so you can test it yourself if you’re starting to feel sick.

Maybe it is a placebo, but hey, whatever makes you feel better, right?