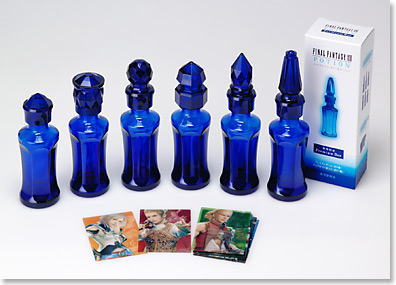 NCSX.com is taking preorders for the “highly limited” (only 3 million units) Final Fantasy XII Potion drink! It’s only $12.50 per bottle! Hey, whatever happened to the standard 300 gp retail price?Now, if it was somehow reasonably priced, I’d totally grab a few just in case I ever got critically hurt. It would have to be a huge emergency for a $12.50 potion, though!

This comic makes a lot more sense now too. It pretty much describes my behavior during all the Final Fantasy games. Why use a phoenix down when a mage can use life? The mage is dead? Oh, I guess we have a catch-22 on our hands. I’m still not using that phoenix down, though. Don’t even get me started on the subject of Elixir hoarding…

I also used to calculate the cost efficiency of using an ether on a mage to cast healing spells, rather than buying potions to heal. Then I’d calculate which healing spell (cure1 vs cure2 vs cure3) would be most MP cost efficient (because casting cure3 on a guy that only needs like, 300 hp is just stupid). Seriously, that’s how big of a nerd I was.

Anyway, getting back on track, anyone wanna split a case of Final Fantasy XII potion with me?

Update: Play-Asia.com has the premium potion in stock for $12.90, though I think shipping is cheaper.

If you wanna go the cheap route, go with Jlist.com. They have the regular bottle for $4.50. That’s the one I went with.