Hey! So “Captain Awesome” got reprinted at threadless.com. But you know what? I didn’t buy it. For some reason, once it was available, I realized that I wouldn’t really ever wear that shirt in public. In this case, the wanting was more desirable than the having. Just like T’Pring in Amok Time! (If you got that reference, huge nerd props to you!)

I like the design, for sure, but it’s just not a shirt. It would be a cool poster or something though.

Anyway, here’s the shirts I got (so don’t get em, or there could be a chance that we’d wear the same shirt on the same day, and that would be embarassing. Unless you don’t live near me or ever come in contact with me. Then it’s ok): 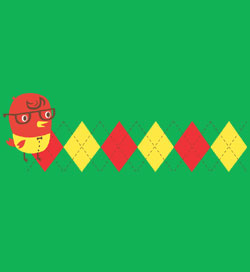 Nerd Berd has a nerdy bird and a cool pattern on it. I’m a nerd, so naturally I like Nerd Berd. It’s also pretty cute. My favorite color is green, so it’s also a plus that the shirt’s main color is green.

The only nerdier shirt I can think of would be one that had binary on it. Oh wait, I already have shirts with binary on them…

What else can I say? I like the Nerd Berd, and hopefully it will like me back. 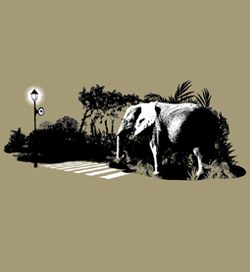 I’m not really sure I know what the meaning of Human Concept is. What I do know, however, is that elephant looks way cool! And it’s crossing the street! At an elephant crossing!

This elephant is majorly detailed. It reminds me of one of the animals that O’ Reilly (not Bill O’ Rielly!) uses for their books. It’s in Khaki, which means it will go great with my… blue jeans! 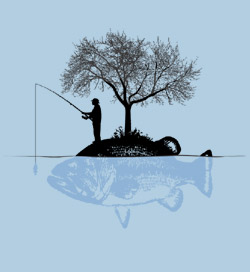 Predicament is a shirt with a guy fishing on a giant fish! I guess his predicament is what he does after he catches the fish. It looks like the fish has already caught him! This shirt must take place in Soviet Russia!

I picked this shirt because it looks cool. I mean, why else would I pick a shirt, right? I’d prefer it in a different color, but blue works. The sky is blue, and so is water. And there’s both sky and water in this shirt!

Looking at these purchases, it seems there’s pattern. Yep, all these shirts have animals on em. I don’t think I planned this when I bought em, it just happened that way. Or maybe I just prefer animals on my shirts rather than precocious artist trash! Whoa, I think I need some sleep now. Good night.

« Word of the Day: titivate Of DDR and Thievery »