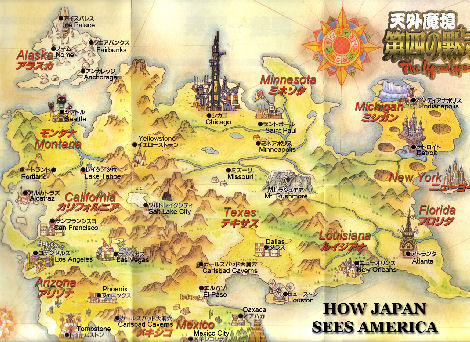 Over at Yukihime, there’s a scanned map from an old Sega Saturn RPG that was set in the United States. From Yukihime:

This map is basically what would happen if you got a bunch of Japanese guys in a room, got them drunk, and then asked them to draw what they could remember about America on a bar napkin. Hell, thatâ€™s probably how this game was originally designed. Anyhow, I feel the map speaks for itself.

This is really distressing. I’m assuming this is some kind of parody thing, but Chicago is some kind of mega fortress, Alaska has an ice palace, Montana seems to be some kind of Neko City, and Saint Paul has a giant one of those bird things that drink water! Most of America also seems to be covered in impassable mountain terrain. At least they had a location from New Mexico: Carlsbad Caverns!

Also scary is the existence of Mexico, but not Canada…

As bad as this is, I have a feeling Americans could probably not do any better.