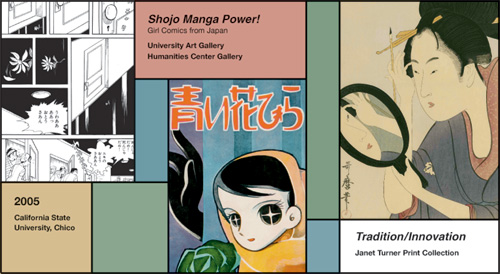 So today in Japanese class, instead of having class as usual, we went over to this traveling art exhibit about shoujo manga. Shoujo manga is written for girls, so no guys in the class really admitted to reading any of it, per se. Actually, I don’t read shoujo manga either; I watch the anime…

Anyway, the exhibit goes through three time periods of shojou manga from the 1960s all the way to the present. The art seemed pretty cool, and I was surprised at times how “modern” the stuff from the 70’s looked. I was hoping there’d be more Yuri and less Yaoi, but what can ya do!? We also got to talk to Masami Toku (the director of the project) briefly about the history of shoujo manga.The exhibit runs until around the middle of the month (I think), so if you’re at UNM, check it out at Maisley Gallery.

I also snuck out with a copy of Shoujo Beat Manga Sampler! “Snuck out” not as in stealing (it’s free after all) but as in getting away with it as a guy. Man, can’t they label these manga something else, like “masculine” and “not quite as masculine?” Honestly though, I don’t care if people know I read shoujo manga, I mean, I’m writing about it on my blog right?

Here’s a link to the exhibit’s homepage in case you’re interested.