So for the past few weeks we’ve been trying to hire for a contractor position to work on our iOS app. Along with the rest of the team, I’ve been reviewing resumes on a really corporate looking website that have been submitted by recruiters on behalf of candidates. It’s an interesting exercise because the resumes are almost all in the same exact format and after a while, they really start to look the same. In some cases, this is because a candidate has been rejected and resubmitted accidentally.

While scanning through a bunch of resumes, my coworker Will noticed a bullet point that actually appeared in more than one person’s resume:

Experienced in creating and custom UIViews, Table Views, Tab Bars and Navigation Bar, which are some basic functionalities in a Multi-view Application.

There are a few things that stand out about this. The sentence itself runs on and on, and the grammar used is pretty dubious. Also, the inclusion of this into an iOS developer’s resume tells you nothing because every iOS developer should have experience with these elementary UI elements, and the sentence even sort of explains that at the end. The fact that it appears in more than one resume is surprising, since it’s such a stupid thing to include in your resume to begin with.

I was curious about this bullet point, so I suggested that Will paste the phrase into Google. Here’s an interesting slice of the results: 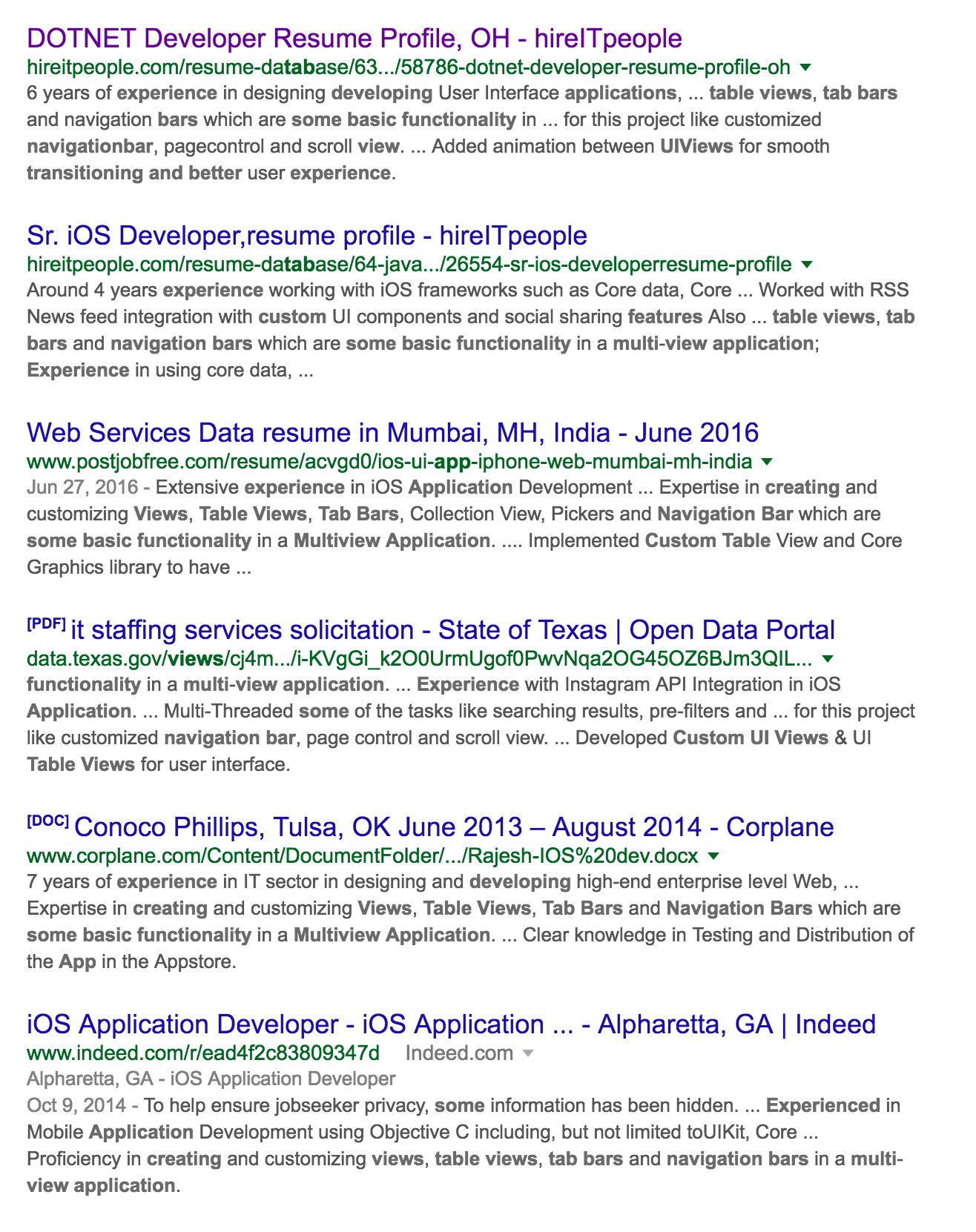 While there’s not a direct match, there are links to resumes which have slightly altered versions of the same phrase. The part that is mostly shared is the “…which are some basic functionality in a Multi view Application.” If you google for that, you will find pages and pages of resumes with a bullet point similar to the original. Will even started a tally of “mutations” of the phrase with added embellishments at the end, or with slightly better grammar.

I was curious which other phrases in these resumes were common, so I tried googling some of them. Some that I found that had become memes were:

I have a few guesses as to why these are in so many resumes verbatim. It could be that the candidate simply copied and pasted the bullet points from a friend’s resume and hopefully actually has those skills. Another could be that the recruiting firm offered to touch up their resume for them and did so lazily. While it’s easy to attribute this to malice, it’s probably just good old fashioned laziness. After all, if it works for so many developers, it should work for you! Either way it looks terrible for the candidate and it’s frustrating for people doing the hiring to see such a lack of originality. I already have to go through more than 30 resumes; I don’t want to think I’m going crazy with all the feelings of Deja Vu.

My recommendation to developers would be to write, in your own words, what you’ve actually accomplished. Resume writing is annoying, and no one likes doing it, but the downside to plagiarism is that I toss your resume out and assume you’re a terrible person. Also, I’m secretly hoping that this blog post becomes the top Google result for all of these copied bullet points so any curious resume-reviewers realize they’re not going insane. Also, feel free to nitpick my own outdated resume which you can find here on my (way outdated) portfolio site.

I haven’t gone in depth at all to discover more of these copied phrases, but I’m willing to bet that a big percentage of bullet points in resumes are simply ripped off from other resumes.