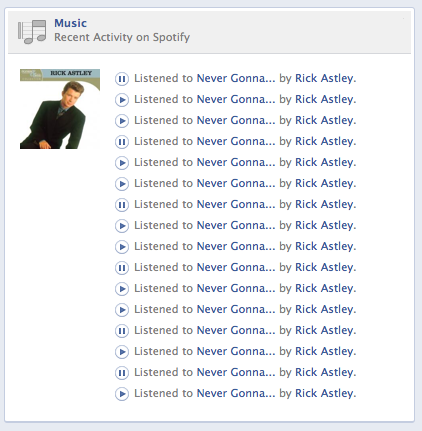 I sort of have a tradition when it comes to Facebook updates. When Facebook introduced polls, I took advantage of the viral sharing properties to expand my poll to more than my close circle of friends. The Facebook ticker feature just rolled out this week, and yesterday Spotify integrated with Facebook’s new graph api.

I’ve noticed a whole lot of ticker updates since then from my friends’ playlists. I decided I would have some fun with the Ticker feature, so I went on Spotify and made a playlist of just “Never Gonna Give You Up.” At first I thought it had not worked, but it looks like my friends are now all aware of my favorite song in the world.

I mostly mess with Facebook to point out unintended consequences of their design decisions. In this case, something passive like listening to music overpowers stuff that might actually be interesting, like a comment or a post. I wonder if Facebook will change their ticker behavior, or continue to allow it to be used for a “firehose” of info while the news feed will be used for more interesting/important stuff.

« An Important Announcement About My Employment Status (And T-Shirts)