I had a mobile startup a while back called Troubadour Mobile. While the company hasn’t been operating for a while, I was using its iPhone developer account to mess around with submitting stuff to the app store. I wrote my Anime Nano app and it was pretty cool.

I wanted to start getting into other kinds of apps, and I wanted to integrate iAd with Anime Nano. To do this, I needed to make my own iPhone dev account because I didn’t want to set up the taxes for a defunct company. I figured it would be a simple process to move an app from one owner to another, because it must happen all the time, right?

I sent in a request to move Anime Nano from Troubadour’s account to my own personal dev account. That was around the beginning of July. I didn’t get a reply until the beginning of August, more than a month later. Unfortunately, between the time I requested the move, my company’s account expired (I wasn’t going to keep paying $100 a year for an account we wouldn’t use).

When the account expired, my original app was taken off of the iTunes App Store. After that happened I just submitted the application again under my own account with a slightly different name (Anime Nano!). Apparently, the “application transfer” doesn’t really even transfer anything. Apple just asked me to remove one of my apps from sale and re-upload the binary. So I waited a month for nothing. This was pretty annoying, because if I had known earlier, I would’ve just done so myself. I don’t know why I needed to wait a month to get those instructions.

Anyway, I submitted the app about a week ago and it was finally approved this afternoon. I’m happy to say that the iAds work and they look pretty neat. 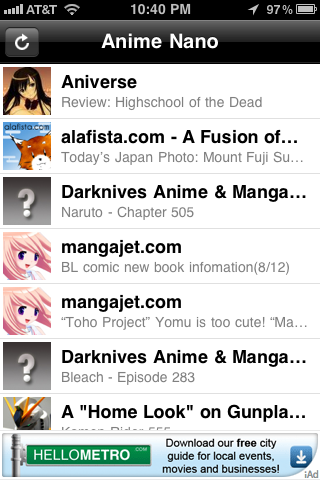 Anyway, if you haven’t gotten it yet (and actually, if you downloaded it before), go get Anime Nano! If you have the old version, iTunes won’t know when it’s updated unless you get the new version.