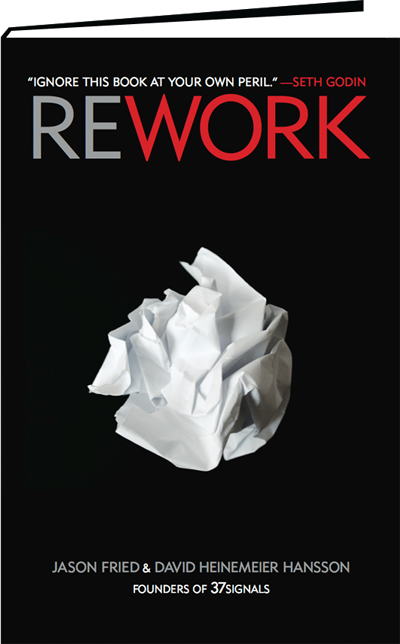 Rework, a book by 37signals (the guys who made Ruby on Rails), is a pretty simple book. It’s appropriately simple, because the book is almost entirely about simplifying things, and the positive effects of doing so.

I started reading the book in a protected PDF from the Microsoft library a while back. Unfortunately the license expired before I read the whole thing, so I grabbed a copy from the Ann Arbor library and finished it up. The book is incredibly easy to read and also incredibly short. It clocks in at a deceptive 273 pages. In reality, there is probably more illustration and whitespace than actual text. It feels like 37signals took general ideas from their blog and distilled them into super short nuggets of information.

I think that the ADD-like feel of the book both helps and hinders. It drives home the point that you don’t need a lot of words to explain something. You can just be simple, and it’ll work. Personally, I feel it’s too easy to blaze through the book and really forget most of what was read since it’s so fast paced. Good thing I basically read through it twice.

For the most part, I agree with most of the sentiments in Rework. The general message is that you don’t have to act like every other company out there. You don’t need to be obsessed with getting big, stalking the competition, hiring billions of people, etc, because being small is actually pretty nice. You can build something that just works, and from there, improve on it. The alternative is taking forever to build a monolithic beast and then finding out you didn’t need all those features.

One interesting thing that I read about in the book was in a section about having “less mass.” The book explains that:

From here on out, you’ll start accumulating more mass. And the more massive an object, the more energy required to change its direction. It’s as true in the business world as it is in the physical world.

What’s interesting is that my former manager who had something like 20-30 years of experience in the industry had used this analogy to explain why my former company was moving so damn slow. He’s a manager that I truly respected and it’s just kind of funny seeing how common a theme mass and inertia is.

Within the context of my most recent work experience, Rework actually points out a lot of what was wrong in the culture. I could go on about it, but that’s for another post. I would encourage you to read the sections: “Meetings Are Toxic,” “Strangers at a Cocktail Party,” “Illusions of Agreement,” and “Send People Home at Five.” As for what went right, Rework did touch on some of that, too (“Focus on What Won’t Change,” and “Say No by Default”).

More recently, I’ve been trying to take the ideas in Rework and apply them to whatever I’m currently doing. I released an iPhone app just a while ago that was barebones. I got a lot of good feedback and learned a bunch about how the App Store process works. A few days ago I submitted an iPad version of that app. It’s also pretty bare, but I know I have room to improve and possibly even start making money with it.

I think that Rework is especially relevant if you are a “starter” type of person, or would like to have that kind of culture at work but aren’t sure how to go about it. I would suggest this book to anyone who works, though. If nothing else, it’s a good way to keep an open mind on alternative perspectives regarding business and business culture.