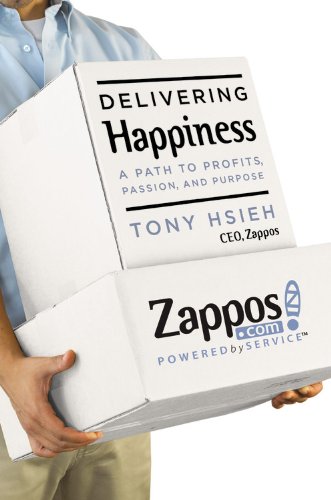 I received an advance copy of Delivering Happiness: A Path to Profits, Passion, and Purpose by Tony Hsieh, the CEO of Zappos. I am posting the book review today because it’s also the official release date of the book! It’s also the day before my birthday, but that doesn’t really have anything to do with this review.

I saw Tony speak at a keynote for the SXSW conference in 2009. The key components of that talk have stuck with me ever since. He basically argued that companies should act more like people. Since they’re made of people, they need to act more holistically while considering more than just revenues. His company, Zappos, has the goal of delivering WOW experiences through service. Basically it’s to make people happy through unbeatable customer service.

I was glad to see that Tony decided to distill that talk (and much more) into book form a little more than a year after his SXSW talk.

The book is mostly a narrative about Tony’s path to becoming an entrepreneur, angel investor, and eventually CEO of Zappos and getting bought by Amazon.com. I say this book is mostly narrative because about halfway through it starts becoming something else. The narrative is funny and quirky, something I’d expect from a guy whose company has a core value of “Create Fun and a Little Weirdness.” He talks about buying worms for a worm farm, then starting a mail order button empire as a kid, which led to selling pizza in college and then creating LinkExchange (which I totally remember using) while working for Oracle.

I feel that Tony and I share a lot in common. I also had many schemes for making money before I had a real job, like selling rocks and doing yardwork, selling Dell coupons on eBay and signing up for random online offers so I could get gift certificates to sites like CDNow (I think Amazon.com bought them). Tony writes about quitting Oracle when he felt his LinkExchange was too good of an opportunity to not devote his full time to, and quitting Microsoft when his company was sold, not waiting for his stock to vest (and losing lots of money in the process):

Having recently resigned at my own (fairly high-paying) job at Microsoft, I feel the same way. Reading this book was a lot like reading about my own life, at least until the part where he figures out what he does after qutting (I’m still figuring that out, myself).

The narrative section goes up to about the point where Zappos finally ends up getting an important loan and relocates to Las Vegas. After that, the book takes a turn and starts feeling more like a business book. Tony starts including lots of email memos to show what was communicated to the employees at certain points, like when the company had to lay off some employees or when they were sold to Amazon.

Different Zappos employees start writing entire sections like “Vendor Relations by Fred.” This makes the book feel much more fragmented and difficult to follow. The book becomes less about Tony and more about a shared experience. The problem is that it’s riddled with asides, lists, email memos and more. There’s really no organization towards the end of the book and it feels very much thrown together. While the lessons at the end of the book might be useful, I feel as though there could have been two separate books. One from Tony’s perspective that stays as a full narrative, and another book for business people on how to make sure their company’s culture doesn’t poison its employees.

Delivering Happiness is a good book. I believe in its author and in the principles contained within. While I feel it could have been organized better, I still think everyone should read it. It’s an extremely quick read and very entertaining most of the way through. I hope that Tony Hsieh’s message of the importance of company culture reaches more people, and that people have better work experiences as a result.

Disclosure: I received a free review copy of this book. My review is an honest opinion of the book.

I’m also holding a contest because I got an additional free copy of the book to give away. If you want to win it, retweet this tweet and follow me @hungtruong (so I can DM you). I’ll randomly pick someone to send the book to once I get enough entries (after a day or so). I can only ship to the US; sorry about that!