In Defense of Food: Book Review 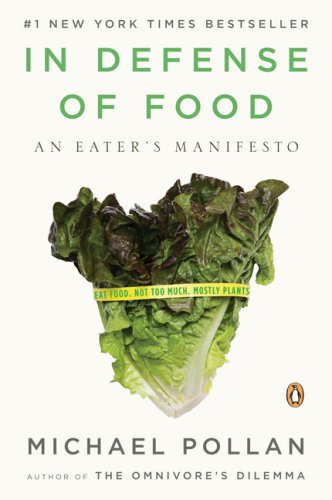 According to Michael Pollan, food has been disappearing from supermarkets around the country. It’s being replaced by food-products, which are not quite food. In Defense of Food argues that we should live by some simple rules: “Eat food. Not too much. Mostly plants.”

I had previously read The Omnivore’s Dilemma, and I figured I would continue my food reading with Pollan’s next book. While Omnivore was a hefty 411 pages, Defense is a very quick read; about 200 pages. Whereas The Omnivore’s Dilemma was a narrative adventure, following the path of a few meals, In Defense of Food is more about the history of our attitudes about food. Pollan explores the policy changes that gave way to subsidized farming and “nutritionism,” a form of reductionist science to ultimately dictate what Americans should eat. In that sense, it’s a much simpler book. A lot of the lessons learned in Omnivore’s Dilemma are in this one as well. In Defense of Food seems to focus more on the effect of the “food” we’re eating on our health, rather than the actual production of the food.

The second half of the book goes into detail on Pollan’s rules about eating. These are simple tips, like avoiding food with too many ingredients, or ingredients that you can’t pronounce. If you follow all of them, your health should improve dramatically. It’s a bit of a challenge, though, to go against the American culture of fast, processed, artificial foods. For example, as I’m writing this, I am staring at a package of Pepperidge Farms Goldfish Crackers. They contain such ingredients as “thiamin mononitrate” and “monocalcium phosphate,” so I shouldn’t really consider eating them. But they’re damn good, too!

Since I moved out of my parents house and began making all of my eating decisions, I’ve tried to strike a balance between healthy and delicious. I’m pretty sure I could manage both, but delicious/easy tends to win over delicious/lots of work. It’s really encouraging to see these food rules, though, in a simple form. I think that I can slowly make a few small victories in my eating (and food shopping) habits that will eventually steer me into better health.

One thing I have noticed in many of the books that I’ve been reading recently is the attack on reductionist science. The argument basically states that science relies heavily on breaking complex systems into smaller, easier to understand parts. These parts can be broken down further until they’re atomic, more or less. Reductionist science believes that once everything is broken down and understood on the atomic level, the system as a whole is understood, QED. The unfortunate proof is that systems are complex, and no one ever understood how a car works by overanalyzing the air freshener.

In Defense of Food argues that “nutritionism,” the food science equivalent to redictionism, is one contributor to our total lack of common sense when it comes to food. We process foods so they lose nutrients, then we pump them back in. But nutrients might interact with others. Fiber slows the absorption of something, certain vitamins are fat-soluble. Pollan’s solution is to just eat food that isn’t processed to remove all of the nutrition.

Barabasi’s book also argues against scientific reductionism. Or at the very least it details the shortcomings of it. One example is that while we’ve fully mapped the human genome, it’s the interactions between genes that really matter. The fact that networks are a great way to model complex systems makes me excited about studying them. Am I getting off topic?

In any case, In Defense of Food is a nice companion to The Omnivore’s Dilemma. I’d suggest you read the latter before you read the former. IDoF is a quick read and highly recommended for anyone who eats food or food-like substances for nourishment.

« Why the Apple iPad Will Fail The Accidental Asian: Notes of a Native Speaker – Book Review »