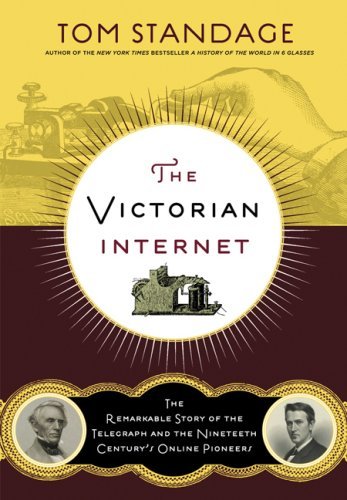 Much of the book is centered around how the telegraph came to exist. It describes the setup of optical telegraph systems where numerous towers were constructed to the laying of thousands of miles of electrical cable, some across the ocean. This part of the book was mostly a bore to me. While it’s nice to know that there was a long process to standardize codes and international regulations, etc, it just isn’t that salient to me. I do, however, appreciate the author’s acknowledgment that there was a lot of bad poetry written about the telegraph. Example:

The nations stand no more apart;

With clasped hands the continents,

Feel the throbbing of each other’s hearts.

A loving girdle round the earth,

Till all the nations neath the sun

Shall be as brothers of one hearth.

The book actually got interesting once it started explaining how people reacted to the telegraph. Maybe it’s a symptom of having gone to a school where sociological and technological problems merge… The name of the book implies that the telegraph had a similar effect in the 1800s that the internet did in the late 1900s. While I was reading I took note of a few things that the author described about the telegraph network that seemed very applicable today.

Regarding newspapers, “James Gordon Bennett was one of many who assumed that the telegraph would actually put newspapers out of business.” Funny to think that the extinction of newspapers was predicted more than 100 years ago, and extended to lay the blame on the internet. In a way, newspapers really do seem like they are going extinct. Maybe it’s that the internet is finishing the job, as a natural extension of the telegraph.

Another chapter describes love by telegraph. There’s a story of a couple who were married while 650 miles apart, one in Arizona and the other in California. Thanks, telegraph! There was also the story of the telegraph operators who were good chums together. Only once they met in real life did they realize that they were of opposite sex, and got married soon afterwards! Sorry, World of Warcraft, but telegraph did it first!

One of the most entertaining descriptions was of a company that “employed thousands of operators … leading to widespread concern that too much power was concentrated in the hands of one company. [It] handled 80 percent of the country’s message traffic and was making a huge profit.” Sound like Google? It was actually Western Union, which seems like it’s being used more for Nigerian scams than legitimate business. Though I guess Google sends plenty of Nigerian spam as well…

There are other examples of the internet echoing things that happened a century before it on the telegraph network. I’ll leave it to as an exercise to the reader to actually read the book. The takeaway from reading this book seems to be that the interactions that happen with humans and new enabling technologies were recorded long before the internet. History repeats itself, and if we want to know what will happen next with the internet, we might want to see what happened to the telegraph.