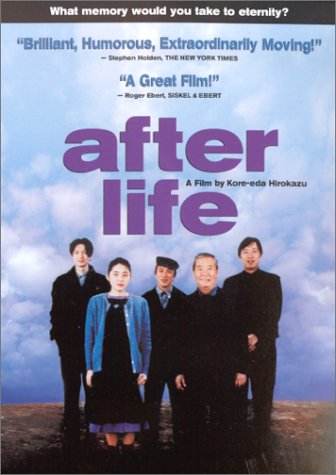 After Life (also called “Wonderful Life” in Japanese) is a film about what happens when you die. I’ve been wanting to watch this movie recently because a few people close to me have passed away in the last year. I was originally introduced to this film a few years ago in Japanese class by a classmate who was a philosophy grad student. After Life has a somewhat positive view on the afterlife, so I thought it’d be nice to watch.

The film’s afterlife is actually really similar to the world as we know it. Seasons change, electricity goes out and people get cold when it snows. The difference is that new visitors to the afterlife have a week to choose their most precious (å¤§åˆ‡ãª!) memory to immortalize in film form. Apparently they’ll watch their memory and then go on to yet another afterlife where they keep only that memory with them.

The idea is both liberating and excruciating at the same time. You can forget all the bad things that happened in life and cling onto one great memory. But you also have to leave all of your life’s work and focus on the one most important moment of your life.

The film works in sort of a pseudo-documentary/narrative mode where the dead counselors help the newly departed choose their memories. What follows is a candid look at the lives of 10 or so people. Some won’t stop talking about their womanizing ways while others think it would be cool to choose Splash Mountain. Apparently a lot of high school girls pick Splash Mountain.

In the midst of all this, there’s also a plotline concerning the relationship between two of the counselors. It turns out the counselors are dead, too. They’re all people who weren’t able to choose a memory. There’s a love story of sorts going on between them which kind of begs the question: why doesn’t everyone just choose to stay in the limbo afterlife instead of making a movie memory? They could literally live forever. Maybe people living in the limbo eventually fall out of love or get bored and decide to end it? I could imagine a number of Hamlet-style soliloquies proposing “to choose or not to choose?”

One of the recently dead, a young punk, starts messing with the counselors. He asks if he can use a dream as his memory, or even just make stuff up. He’s sort of the voice of reason in the movie. He asks the questions that I’d ask and prys much more than the other deceased. While watching I realized that the actor was also Morita in Honey & Clover, another Japanese movie I recently watched. Apparently he’s also in Casshern!

After all of the dead people choose their memories, the counselors get to work making their memories into mini-movies. After Life works because of its absolute earnestness. It really seems like a true documentary where these people are choosing their ultimate fates. They seem completely genuine when they’re describing the happiest moments of their lives and genuinely happy to see those moments recreated on set with actors portraying them. It probably helps that the director did a lot of actual documentaries before working on this movie.

After Life is a great movie because it successfully suspends disbelief. For the 118 minutes of the film, I’m convinced that when you die, you make a movie about your life, watch it, and relive that memory forever. That alone is wonderful, given our uncertainty of the afterlife while we’re still living.

So yeah, that’s what I have to say about After Life. It’s quirky, funny, thoughtful and genuine. I really dig it.