So I was browsing the various Facebook networks that exist for things like regions, universities, and workplaces. Being a fan of Google, I checked to see how many Googlers (Google employees) are on Facebook. The count as of right now? 2,041. 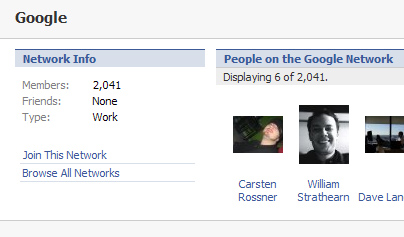 Okay, fair enough. Googlers are allowed to be on social networks, right? But Google has a social network of their own, Orkut! To be fair, Orkut is very popular with Brazilians (for some reason), but it has yet to catch on in North America. But shouldn’t Orkut be popular among Googlers? It is, after all, a product that’s made by their own company. 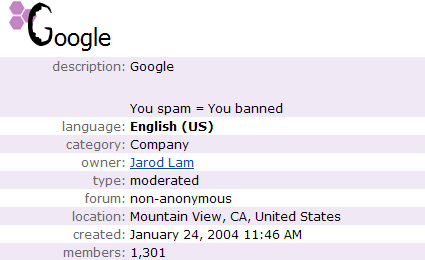 I tried to find an “official” Google group on Orkut. Of the Googlers that I know (okay, like one), they’re either in the “Google (863)” group or the “Google (1,301)” group. Keep in mind that on Orkut, anyone can join the Google group, whereas on Facebook, you must have a valid Google email to join. To be nice, let’s just call the one with 1,301 members the “official” Googler group.

I think this just illustrates my belief that Google really needs to put some work into Orkut to make it a viable social network. Right now, I think they’re just sort of letting it sit there. It’s really uncharacteristic of a Google product, and it’s something that’s surprised me ever since I found out that Orkut was owned by Google.

How can Google do this? Give Orkut some personality! Right now it’s incredibly dull to use. I think the reason people use Facebook (at least, the reason I do) is that it’s fun. Facebook has random crap that doesn’t make logical sense, but is fun anyway (like poking). That’s why I really like Facebook as a social network, and why I think it’d be a fun company to work for. The work atmosphere at Google is incredibly fun, which is why I can’t understand why Orkut is so boring. Even Myspace lets users customize the layout. Though this is bad for the eyes, users like it.

This isn’t so much of an attack on Orkut than it is a wake-up call. I really think that with the resources that Google has, they could create a great social network. Right now it’s wasting away.

And to end on a fun note, here’s a joke that I found on Valleywag:

Orkut BÃ¼yÃ¼kkÃ¶kten, creator of the Google social network that bears his name, dashes into CEO Eric Schmidt’s office and says, “We have a million Brazilian users!”

After Orkut leaves, Eric calls VP Marissa Mayer and asks, “How many is a brazillion again?”