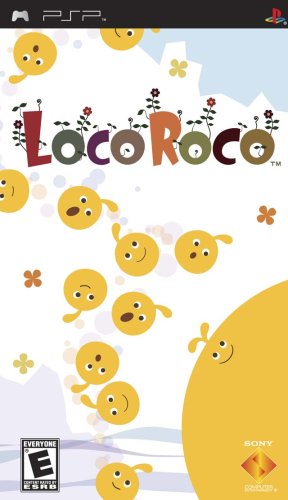 So I bought LocoRoco from Amazon.com after some crazy glitch that let me order it for 60% off. It finally came while I was out of town and I got a chance to sit down and play it.

LocoRoco is one of those weird Japanese games that become famous due to their weirdness. In LocoRoco, you roll a yellow ball animal thing by tilting the world left or right. You can also bump the world so the ball can jump. When the ball eats red flowers, it can grow. You can also blow up the big ball into smaller balls, and reform the big ball later on.

Basically, the idea is to get the ball as large as possible and to make it to the end of the stage. You can get attacked by black spiky things that will reduce your size. At the end of the stage, you see how well you did getting larger, and collecting other random stuff.

And that’s how the whole game goes. There’s not much else. If you’ve played one stage, you’ve sorta played them all. I got through the first world.

One plus is that the game is super cute. Like the little yellow balls will sing in random pseudo-Japanese (it’s not actual Japanese, but it uses Japanese syllables). And the theme song is sorta addicting. Just listen to it! [audio:LocoRoco Title Theme.mp3]

So yeah, LocoRoco is sorta repetitive, but also way cute. Like me!