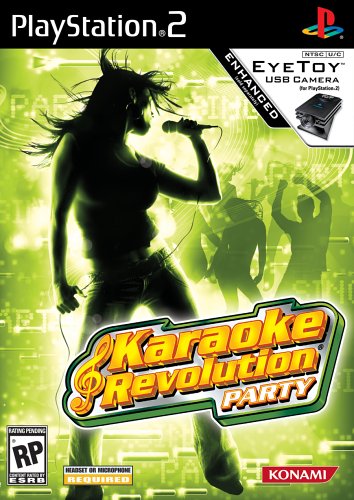 I got Karaoke Revolution Party in December for around $10 at Toys R Us. It was a pretty sweet deal. I already had a microphone from Socom, so I figured I wouldn’t need an extra mic. Luckily it worked.

So the basic premise of Karaoke Revolution is that you sing songs, and you get more points if you sing in tune with the correct vocals. There are note “tubes” that show up indicating whether you’re singing too low or high. It’s not quite like reading music or anything, but I guess it’s pretty good for public use.

I really like the idea of playing a game with only your voice. It’s a pretty interesting idea and I’m kind of mad that I waited so long to finally buy a Karaoke Revolution game. I sort of secretly wanted to buy it ever since seeing these guys playing it.

The gameplay isn’t perfect, though. It seems like the game has an easier time recognizing pitch in higher octaves, so if you’re a guy, you already have a disadvantage to the girls. Also, the game is really strict in telling you exactly how to sing a song. So when I add some “soul” it ends up costing me points. Boo! It’d be pretty sweet if the game could detect freestyling and reward players for doing it well. I guess that would be pretty hard though.

The song selection is varied. There’s a lot of songs from the 80s up to current popular songs. They even have Neil Diamond, which my brother was happy about. I think most people will find at least one song they’d be interesting in singing, if they’re interested in singing a song to begin with.

Overall, Karaoke Revolution Party is a pretty cool party game. I wish I had bought two mics so I could test out the versus and duet modes. I think there’s some duets… Maybe I’ll buy the new American Idol version.