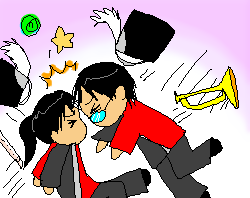 So today was Zia, the big marching festival of the year hosted by UNM. It was pretty fun, despite all the work and whatnot. This will most likely be my last one, since I’m gonna graduate in December. Not that I feel overly sentimental. I thought my last one was gonna be in 2002, but I ended up doing marching band this year on a whim.

It was a pretty good end to a marching career. And by that, I mean the show was horrible. The music part was okay, but marching was crazy. First off, the hashes for the high school bands are about 4 steps away from our normal ones. This threw off pretty much every set. Next, the sun was shining directly on the grass, and I could barely even see where the lines were painted.

That’s not all. For some reason, my throat got super dry, and by the end, I could barely play anything at all. Luckily this happened before I took my solo.

There’s more! During the drum break (when all the difficult marching goes on), my shoelace got untied! So I had to sorta hop around and I got out of step multiple times. I guess a flute girl (who will remain unnamed) got lost, and I collided with her after doing an about face. I think that’s all the bad stuff that happened.

Honestly, I think it was probably the worst show I have ever marched in my marching band career. Not that it’s necessarily a bad thing. It was actually pretty fun. Since UNM doesn’t get judged on their own field, it’s not like I had to worry about having points deducted or anything. Word from some spectators is that we sounded fine. I seriously want to get a hold of the tape, so I can post it (and see the collision)! Ah Zia, how I’ll miss you.

Hinano, my friend from the podcast that I do, made up a comic about the event. That image up there is a panel from it. To see the whole thing, click here.