Guilty Gear Isuka: I Think I’m Getting Too Old For This… 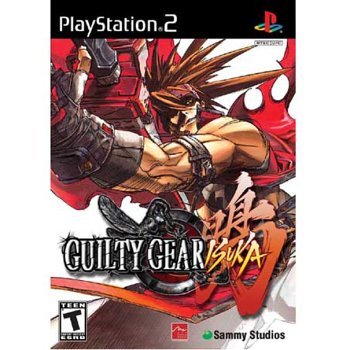 So today I decided to take a somewhat dusty, unopened version of Guilty Gear Isuka (that I bought from Amazon.com for $10) off the shelf and actually play it! I’m something of a crazy game buyer (I buy them when they’re cheap), and I have way too many to actually play them all. Anyway, I popped it into my PS2 and was immediately confused.

Guilty Gear Isuka is a sprite-based fighter, kind of like Street Fighter 2. It’s also probably one of the last in a dying breed of games. This Guilty Gear is actually the first one I’ve ever played (though I’ve seen it being played in the Genshiken anime!). The graphics are top notch, and the cool factor is definitely there.

I figured, “if it’s cool enough for hardcore otaku, it’s cool enough for me!” I think I’m getting old. Sure, the moves are all fireball/hold back forward type moves, but there’s other complicated things built in. The game supports 4 players at once, which is kinda cool, but that means you have to do your own turning.

Also, I found that in the middle of a battle, the game’ll say something like “Joker has appeared!” and throw you into a two on one battle. Totally not fair! I have a feeling that in my youth, I’d have probably spent more time on this game (memorizing moves, continuing a billion times after dying), but I just don’t have it in me anymore.

Give me my tried and true Tekken fighting style, and I’ll get Heihachi on your ass!