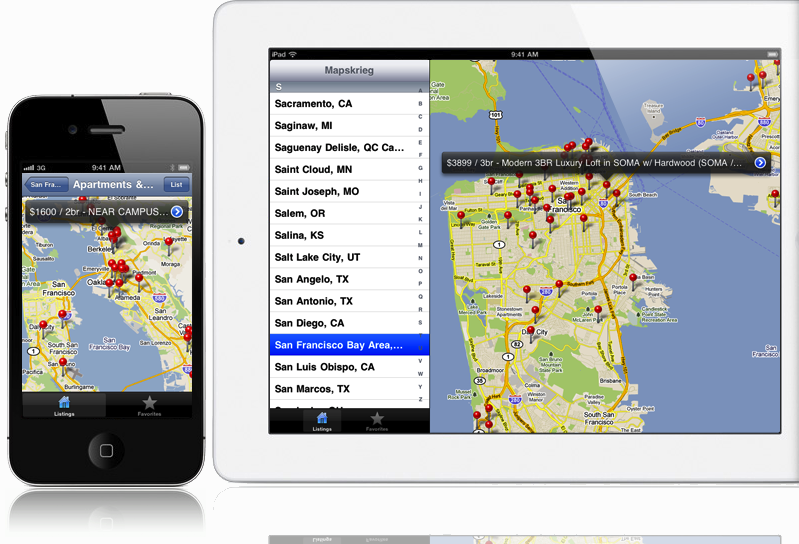 It’s been about 4 years since I announced the launch of Mapskrieg, my Google Maps and craigslist mashup web app. Since then, I’ve gone to school (again), worked for Microsoft and quit, and made a few apps. Today, I’m happy to announce the launch of my newest app, Mapskrieg for iOS!

I’ve been working on this app for a few weeks, and I think it’s ready for public consumption. It’s basically Mapskrieg, but developed natively for the iPhone and iPad. In the past, I’ve taken a sort of iterative approach of releasing fairly minimal apps and improving on them. For example, I released Threadless as an iPhone only app and later added the iPad support. I wanted to release Mapskrieg on both platforms so the launch would have a little more bang. Plus I think the iPad app is the better of the two, and I really wanted that one to stand out for the release. I’ve been getting much more comfortable with mobile development, and I’m very happy with the rate at which I was able to conceive and release this app.

That’s not to say I didn’t struggle or learn anything new with it. While a lot of the concepts are borrowed from my Threadless iPad app, I had to do a lot of stuff I hadn’t done before. For example, since Mapskrieg is going to rely on iAds to make money, I decided that both the iPad and iPhone versions would support iAd. Apple, in their infinite wisdom, made the split view controller a very useful and now, standard, design paradigm. Unfortunately, they don’t provide any support for using it with iAd at all. What the fucking fuck, Apple!? So I had to basically recreate the Split View (well, the landscape mode at least) in order to support iAds. It’ll be well worth it if I can rake in some iAd dough, though!

This post also comes almost 1 year after I quit my job at Microsoft. That milestone probably deserves its own post, but I’ll just say that I have not yet regretted my decision in the very least so far. This is as fun as it gets, folks!

Edit: Oh, I forgot to link to a demo video that I recorded for a contest. Check it out in case you don’t have an iOS device:

« Google, Bing, and SERP Copying: Additional Evidence? The Internet Is For… Downtime. »