About a week ago I thought about working some more on â™¥s Threadless, my fan made iPhone app. I originally designed it for the small iOS devices like the iPhone and iPod touch, and figured I would do the proper iPad version later. I got the itch, so I got to work figuring out what an app on the bigger screen would look like. 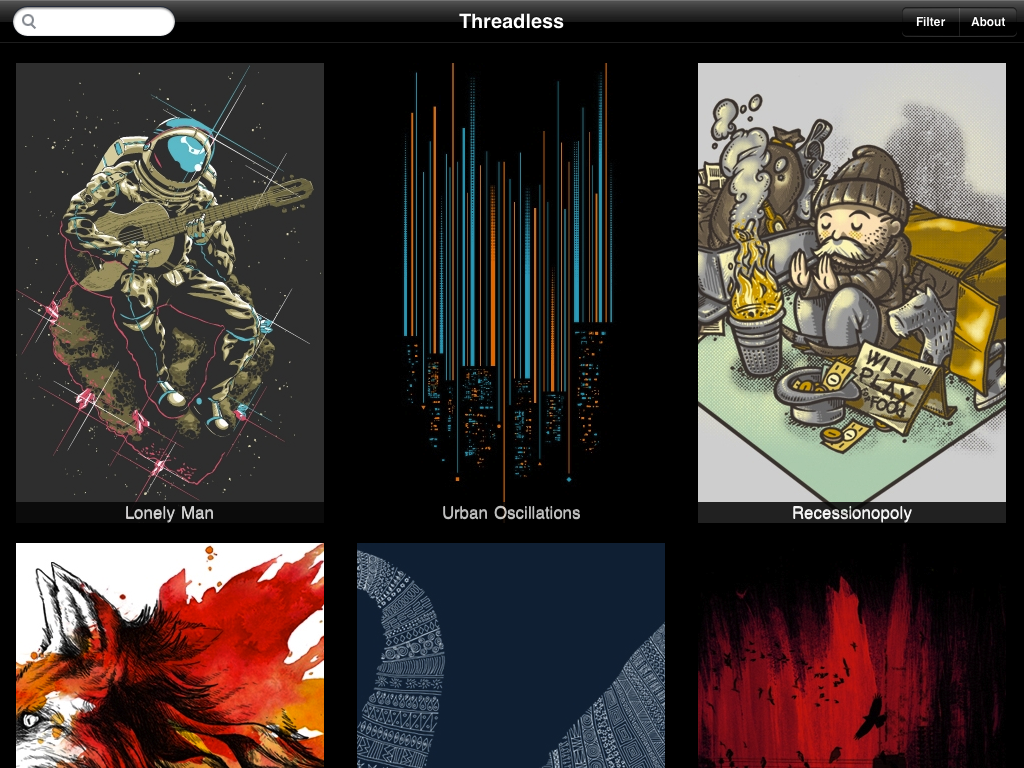 I knew that I wanted a grid-y layout as opposed to the list-y one of the iPhone/iPod, which was partly the reason why I hadn’t done the iPad version yet. Lists on iOS are easy because they’re given to you for free. Grids are a whole other beast. Luckily, I ran into a framework (AQGridView) on GitHub that does grid layouts in a tableview-y sort of paradigm. The framework was still a little beta (or alpha) as I had to go in and change a few things that were crashing, but it did succeed in making my job a lot easier overall. I’d like to try contributing to that code to improve it, but I guess that’s another post altogether.

After getting the grid stuff working, I decided to use a modal pop up view to display the images and sharing options all in one view. Since the iPad has much more screen real estate, it’s easy to design things without running into space issues. You don’t, however, want to just stick a billion buttons in because you can. I think this design does a good job of showing enough stuff to the user, but not too much stuff too soon.

I still have some bugs to fix, mainly with memory management due to the grid view stuff. If you have any suggestions, feel free to comment on this blog!

Hopefully the iPad app continues the mission of the iPhone app, which is to provide a really easy and fun way to browse and share awesome Threadless designs! I may have been an early iPad doubter, but I really believe that it’s a great device for consuming content. Even on my iPad 1, the designs and colors just pop on the app. At least I think so. But you don’t have to take my word for it!

Get the app if you don’t have it already!

« Note to Myself about UISplitViewController and Auto-Rotation Google, Bing, and SERP Copying: Additional Evidence? »