I recently re-read Ender’s Game. The first time I had read it was in middle school, probably around 6th grade. Now I’m in ~19th grade or so. Or maybe grades stop when you get a terminal degree. Anyway, I thought it’d be interesting to write up my thoughts about the book. I previously wrote about them in web form, yet the editorial quality was a bit lacking. I actually dug up the “OSC” page I had made and here’s a screencap: 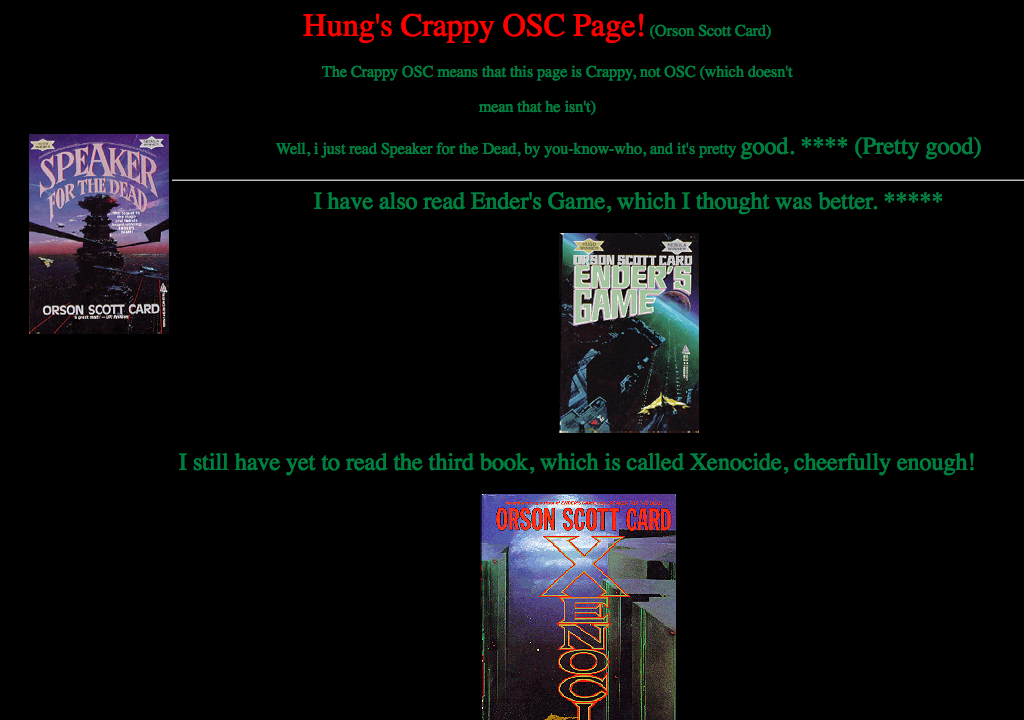 What you can’t see is that the red text on top blinked. I’m not even joking.

So what did I think of Ender’s Game this time around? I still liked the story, but I had quite a different perspective this time. I first read the book when I was around 11-12. The same age as the protagonist when he’s at the top of his game. I must’ve read the book more for the action and less for the things happening behind the scenes. There’s a twist ending that I won’t spoil, but since I already remembered that, the story was a bit different the second time for that reason as well.

I think that when I was reading the book for the first time, I wanted to be like Ender. I wanted to be a genius (I always thought geniuses were pretty interesting). I wanted to do things that other people could not. I wanted to be recognized for talent. Maybe things haven’t changed much since middle school, but I feel I have a different perspective now. I see Ender as a victim, more than a hero or a genius.

One thing I didn’t find very realistic was that Ender is basically put into boot camp at the age of 6. And he takes all the punishment up until he’s something like 12 years old. Are kids just that good to listening to adults? I think that in real life, there would be a lot more AWOL kids running around asking to be sent home. I guess Ender wanted to avoid his evil brother back on Earth.

The book seems much more violent this time, too. I guess that when I was in middle school, I couldn’t get enough of the gore and brutal beat-downs. But imagining little kids kick the crap out of each other is kind of sad. Lord of the Flies is cool because the kids just kind of naturally gravitate to going insane, but Ender’s Game has adults who egg them on.

It’s interesting to think of what I remembered from reading the first time and how it translated to the second time I read the book. For example, there’s a description of a “desk” that Ender uses to play a realistic video game. Ender goes from environment to environment, killing giants and being killed in numerous ways. I remember imagining the game looking something like Mario 64, since that was what was around at the time. This time I thought of it as much more realistic. The interesting part is that the game’s specifics were never really described. Your imagination was required to fill in the blanks and the image in my head ended up being different than before.

I may or may not continue reading the Ender Wiggin series of books. I remember not liking the next book in the series as much as the first, then quitting in the middle of the third (or simply sleepwalking through it and forgetting the entire plot). Pair that with the fact that Orson Scott Card has some very negative beliefs that I don’t agree with and it’s hard for me to get into his books. I’ll give Ender’s Game **** (pretty good). I guess I’ve become more critical in my advanced age.