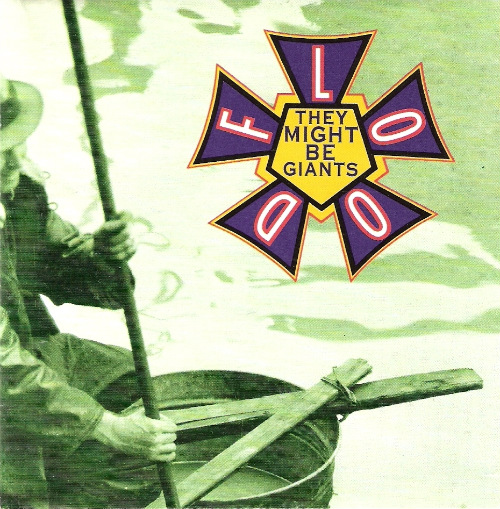 So I saw They Might Be Giants in concert last night. This was a super special show where they played all of the songs from their album Flood plus some other songs as filler.

There was actually an opener called “Guggenheim Grotto.” Their music wasn’t too bad. But it seemed really inappropriate as an opener to TMBG. Like their songs were about love and pretty serious without any funny lyrics at all. You could kind of tell the crowd was not into them. I felt they should’ve had a more appropriate opener, but oh well. I guess there aren’t really a bunch of bands that are like TMBG and could open for them.

They didn’t actually go on stage til around 10pm, opening with some kind of song about elements. I haven’t listened to their kid’s albums, so this one was new to me. Then they did some other songs before launching into Flood. Along the way they also did some weird puppet show, but it seemed like they had less random stage stuff than the last concert I saw, where they channeled a dead person or something.

For the most part they played songs from Flood in sequence, though for some reason they rearranged Racist Friend and maybe also Particle Man. I think some of the fans were like “WTF” because of that. Personally I’ve listened through Flood so many times that it seems like one giant song. So any break in the sequence is pretty noticeable.

While I like the concept of playing a whole album for a concert (plus other songs), in practice it seems kind of absurd. Some songs just don’t make sense live, like Hearing Aid or Minimum Wage. But in the spirit of experimentation and randomness I can accept it. While Flood is a really good album, I would’ve liked to hear more songs from other albums, too. They did play She’s An Angel, which was cool. And Famous Polka, The Mesopotamians (which I guess they use a lot as a pseudo closer), Shoehorn With Teeth and Why Does The Sun Shine? But what about Ana Ng and Don’t Let’s Start? I guess you can’t fit all their songs into one concert…

As with the last time I saw them (almost exactly two years ago to the date!), TMBG is really good live. Some of the Flood songs seemed a bit under-rehearsed, but besides that they were good. Linnell sang a wrong lyric in Letterbox and I think everyone noticed. Also, random thought of the concert: “Is it weird that there is a giant room of people all singing along to a song about buying prosthetic foreheads to wear on their real heads? I guess not.”

Also similar to last time, the band left, then came back for two or three songs, then left again. At this point I was really tired and started walking off. But then they did a second encore! That’s how you know they’re professionals. I just hope they don’t push it so much that each song requires an additional encore, starting from the first song played. That would get tiring. The last song they did was Fingertips from Apollo 18, which I think they also did the previous concert I saw. It’s a crowd-pleaser.

Hopefully I will get to see They Might Be Giants again some time. They really are fantastic live (especially Linnell’s piercing voice) and really fun, too.

« How To Date a White Woman: A Practical Guide For Asian Men Wii Fit Plus Review »