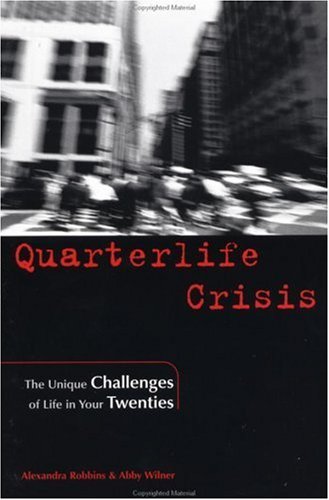 Today, I turn 26. I think I can officially have a “quarterlife crisis.” Yes, I know that’s pretty generous, assuming I’ll live to 104, but hey, with science and technology, maybe life expectancies will shoot up…

Though I used the term previously, I recently read about it at Krunk4Ever. That led me to an article about the phenomenon, which led me to a book on the subject. I checked the book out from the library (Shapiro Undergraduate, AKA the UGLi) and figured it’d be an interesting read.

Basically, the phenomenon is that people these days are on a fixed track for much of their lives, up til around their twenties. They go to grade school, do well in that, go to college, do well, and maybe go to grad school. After getting a terminal degree, they actually have choices to make. They need to decide what they’ll do for the rest of their lives. This can seem daunting, apparently. I suppose I myself feel that way, though mostly I think it’s empowering and exciting.

The article I read was concise and informative. The book is a bit too long, too colloquial and seems to talk down to the reader a bunch. There’s also lots of random references, like a testimonial that uses Back to the Future to drive home the point about rejection (Marty’s dad is a wuss). Basically, the book is composed of a bunch of examples of people who had quarterlife crises and what they did to get out of them. Here’s one of my favorite excerpts (of the amount I read (I only got about halfway through the book before deciding it’s a waste of my reading time)):

I’m going to go out on a limb here and guess that Sandra has an ALA-accredited degree… Librarian!

Maybe one thing that just annoys me about the book is it’s full of whiny twentysomethings complaining about their lives that aren’t really that bad. Everyone wants a job that’s fulfilling and interesting. But those don’t come easily; if they did, everyone would have them. The book claims the profiles are from multiple ethnicities and regions of the US, but it reads like Stuff White People Like. This is kind of amazing because the book came out years before the blog.

I guess my own experience has been a bit different. For a while I didn’t know what I’d end up doing, but I was pretty confident I’d be okay in the end. I just realize that as bad as things might seem, they could definitely be worse. I’ve also been extremely lucky, getting into a great graduate school program, securing a job before graduation, etc, so maybe I have enough direction that this crisis doesn’t apply.

I’ve had a few life experiences that have shown me that living life to the fullest is really important. There isn’t really time to doubt yourself and get into a slump. After all, the quarterlife crisis assumes you will live to 100. It assumes that you will have much more life ahead of you. While that may be true, I’ve seen firsthand that life can be cut very short. I think the trick is living with intention and enjoying life however you can. Roll with the punches; play it by ear. This doesn’t mean to forgo planning, but don’t sacrifice too much for the distant (unpredictable) future. It sounds clichÃ©, but really, I think it’s a good motto to have.

Some people are not even lucky enough to reach their quarterlife crisis. That seems to make the “crisis” seem a bit more manageable. While this is a pretty far-out comparison (being unsure of your life is better than being dead), I think it helps to put the thing into perspective. Be sure to check back in ~25 years for my mid-life crisis thoughts!

« Shuffling and Randomizing Algorithms for Music Playlists Firefox 3.5 beta 99 – Get Multitouch Gestures Back! »