The State of The Book (and Bookishness) 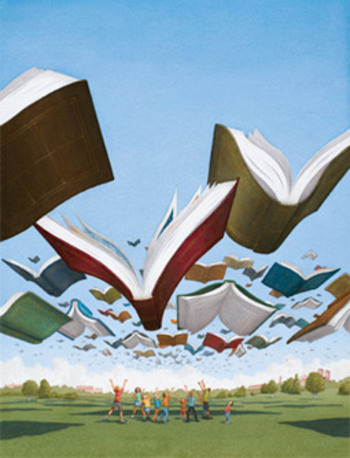 I attended a sorta all day symposium last Friday at the University of Michigan titled “Bookishness: The New Fate of Reading in the Digital Age.” While a lot went over my head (I am not as prolific a reader as many of the presenters), I think I still got some cool ideas from it.

Leah Price spoke about book fetishism. How, as the book is considered less and less the de facto vehicle by which its contents are delivered, it becomes more of a fetishized object than just a “book.” In other words, there are computer screens, Kindles, audio books and other ways for us to digest fiction and non-fiction works. Because of this, books become special objects. The act of reading a book instead of a screen or anything else becomes something special and deliberate.

I tend to agree a lot. Just as part of me enjoys wearing glasses because many people do not, and the act of wearing glasses sort of differentiates me from other people, so does reading a physical book. On top of the fact that leisure reading of books seems to denote socioeconomic status (and the kind of company you keep), I guess I also just like reading. Besides, I don’t have a TV, so what else am I supposed to do with my free time?

Paul Courant brought up a lot of issues with digital vs. physical intellectual property that has a lot to do with other mediums as well (and not just books). He pointed out that digital copies of things do not currently afford the kinds of things that physical copies do by virtue of simply existing in real life. He argued that there’s a lot of information contained in physical artifacts. When you walk into someone’s house, you see the books on their shelf and can make an estimate of who they are by what books they’ve read. Someone later pointed out that it isn’t necessarily which books they’ve read but which books they’ve bought! Another point is the legal ramifications of DRM of digital goods versus the common sense physical item. Courant asked hypothetically if he’d be able to leave his Kindle (and the books on it) to his kids when he dies. He has a number of books passed down from generation to generation. Will that stop with digital distribution?

I tend to like the romanticized notion that physical items have a particular charm and historical value. I also think that digital information can also have some valuable information, especially in the form of metadata. The digital photo from your Canon SLR may not have the same qualities as film, but it could also contain metadata like where the photo was taken, when it was taken, camera settings and other stuff that’s very valuable. We might not be able to put things like Bill Gate’s computer into a museum like we do Galileo’s sketches, but think how cool it would be to have the revision history of a future great novel (assuming novelists keep their documents in a version control system…)! You could see all of the steps that the writer took, things they wrote and erased, and the order in which they produced a work. Now that I think of it, WordPress keeps a revision history of sorts, so I guess we’re not too far off that idea.

It’s interesting to see how the “death of the book” is being described. It seems as though the general message of the day was that books were already dead (and long live the book). The decoupling of the book and its contents happened a long time ago. But for now, I think as long as people continue appreciating them (and I think enough do), the book will still exist as one of many vectors for the dissemination of information.

« I’m in Ur Universities, Graduating Ur Programs Freakonomics – Book Report! »