Yahoo’s HackU Event at the University of Michigan

I sorta participated in the HackU event that Yahoo sponsored at my school. I say sorta because I got back in from SXSW on Tuesday night (post about that forthcoming) and missed the kick-off. First off, I gotta say something about the name. HackU. Is that like a pun on something?

Anyway, on Wednesday the Yahoo guys went over some stuff on semantic web, search monkey and BOSS. Apparently, the customized search results are the “carrot” on the stick for content producers to markup their content semantically. The Yahoos noted that the customized results provide better click-through rate. While that’s a nice way to think about incentivizing the semantic web, I see a few flaws.

First off, the increased click-throughs are probably due to the pretty graphics and stuff. What happens when everyone has customized search results? The search results page gets cluttered and looks like crap. Furthermore, an increase of click-through in a search engine that has 20% of the search engine market (says Comscore… the numbers for my sites are more like 2-3%) is not much. In my case I’d probably be better off spending my time doing other SEO stuff for Google. Yeah, this is kind of harsh to say (I didn’t say it to the Yahoo guys’ faces) but it’s also realistic. Honestly, I do hope search monkey and BOSS end up being successful, for Yahoo’s sake. As far as swag goes, I picked up a brown Search Monkey shirt on the way out. Oh, and they served some tasty Indian food.

Anyway, I missed the Yahoo events on Thursday. Apparently they did some presentations, then went to a bar. Instead, I had fun at the video game archive and my student org, SCSI. Then on Friday, the 24-hour hackathon thing started. I got there at 4pm and ate some food (it came in waves, burritos, pizza, snacks, Red Bull, soda, etc). They had a different shirt this time, a black one with a wizard on it!

I started trying to figure out what to hack on and came up with an addition to a site that I’ve slowly been working on, What is Hung Doing? Note to self: I think I need to write a blog post on WiHD as well. Basically, I thought it’d be cool to add my location to the site (I was hoping that Google Latitude would be able to do this but I guess it doesn’t offer an API). I used Fire Eagle and the iPhone app called Sparrow to update my location. To grab the location I just made a new application on my server. I dunno the best way to present this info. I’ll fix it up later.

I got the location stuff working and promptly decided to go home around 2am. No 24-hour hacking for me. On Saturday (today), I got up and ran some errands. I bought groceries and got a haircut, then raced back to the CS building on North Campus to do my presentation for WiHD. There were some really neat hacks that were shown off today. One of my friends from the School of Information even won 3rd place. I ended up with a novelty award: “Wannabee Internet Stalkee” or something like that, because WiHD basically enables stalkers. But hey, if it keeps them online instead of around me, then it’s okay, right? Finally, I picked up my final shirt (It has a dragon and a kung-fu guy on it) and went home, along with my award: 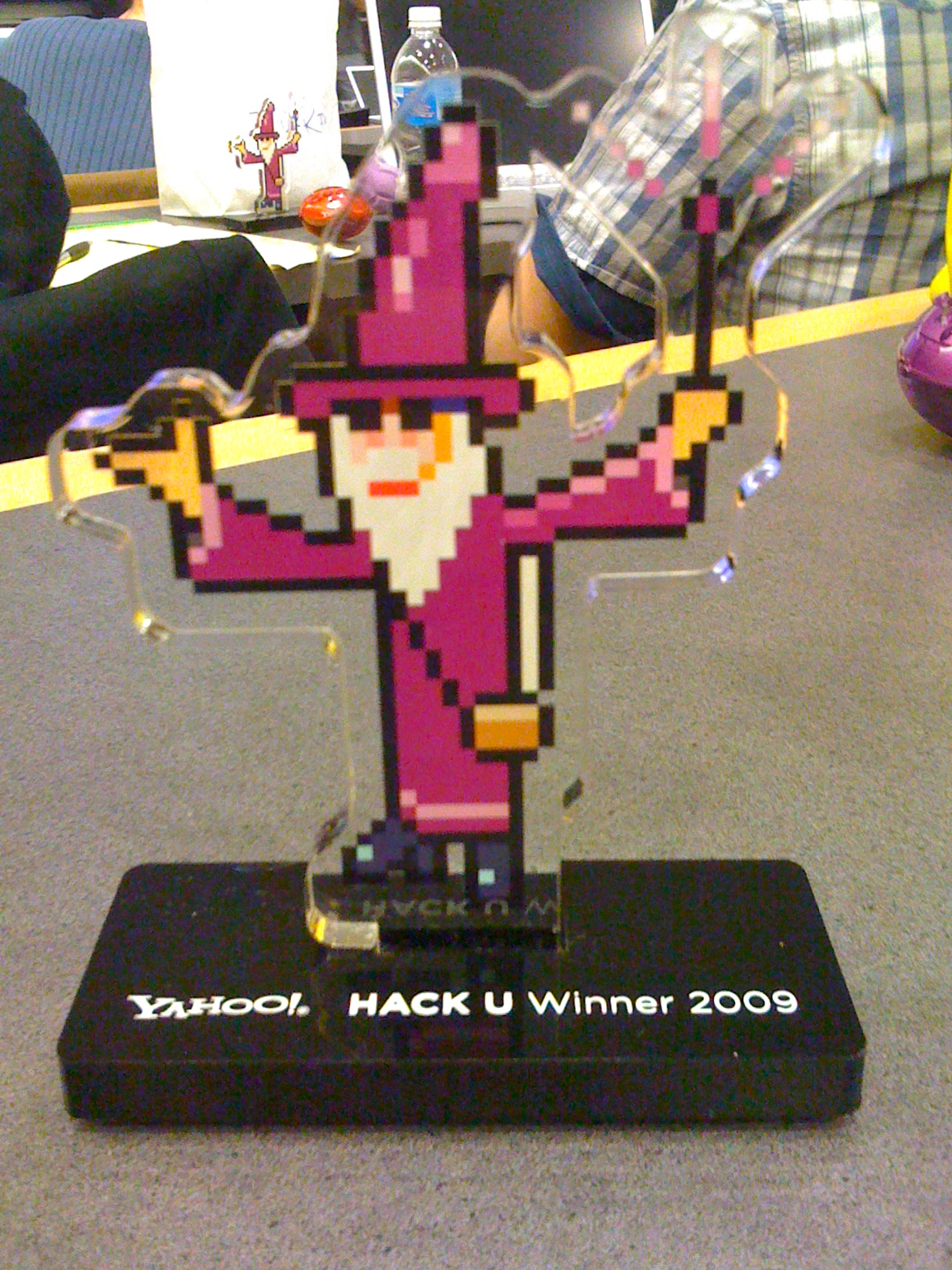 Not too bad for just hacking away at my own project. It’s nice to see Yahoo come and show some goodwill to our school, especially since they skipped out on the career fairs this year. I wonder if they’re even hiring. Either way, I got three shirts, an official Yahoo Faceball, a random puzzle ball and an award, so I’m pretty happy.

« Twitter? I Hardly Know Her! The Costs of Internet Fame: SI Visiting Days 2009 »