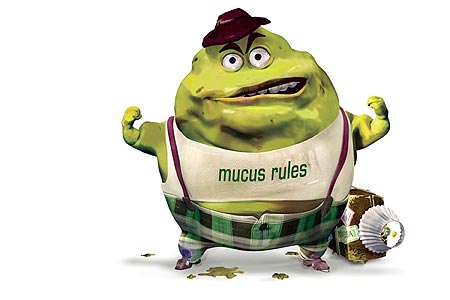 So I have a cold right now. I called my normal doctor’s office and apparently they don’t do urgent care type stuff. But they do have a nurse! So I talked to the nurse and she gave me a list of drugs to take. One of them was Mucinex.

Apparently this is some kind of miracle drug. It’s the one in the commercials that has a family of green boogers (or mucus?) living in a human’s chest. Then the person takes the Mucinex and the family of boogers is evicted, to put it nicely. Mucinex tears families apart. Families of the mucus variety.

Anyway, I used it and it seems to be okay. It didn’t work in the elaborately theatrical fashion as the commercials would have me believe, but I think I have less junk in my chest now than before.