Sweetcron: Roll Your Own Feed 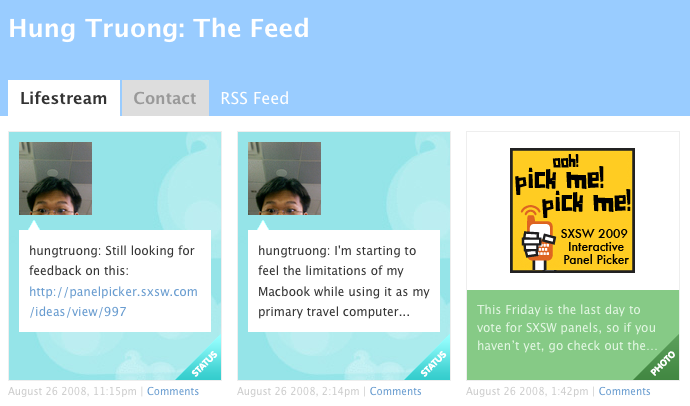 I just found out that the roll your own feed thing called “Sweetcron” has been released. Basically, you install it on your server and it aggregates your activity onto one page. I installed it and stuck my blog, twitter and delicious accounts into it. Oh, and Digg too, I think, but I don’t really Digg stuff much anymore. You can see it here (it should have this post on it by the time you can read this, too).

The initial release is really barebones and somewhat crappy. There’s no commenting system (it just tells you to add one). I like the way that the system formats images within imported blog posts, but everything else seems like an afterthought. The Twitter imports had a picture of some random Asian dude before I changed it to my own picture. Why not use the Twitter user image? Also, when you click through to a blog post, all of the text just pops out, unformatted. It turns everything into one long paragraph.

I’m all about paragraph breaks.

Besides a few supported feeds, Sweetcron kinda just imports RSS generically. Like my delicious bookmarks don’t have anything special. Just the text and a link to the bookmark. At the very least, Sweetcron should have support for all of the things that FriendFeed does. And by support, I mean it should intelligently handle any categorization and formatting of the content.

I guess Sweetcron is strictly for the hardcore such as myself, but I was hoping it’d have a little more going for it upon its first release.