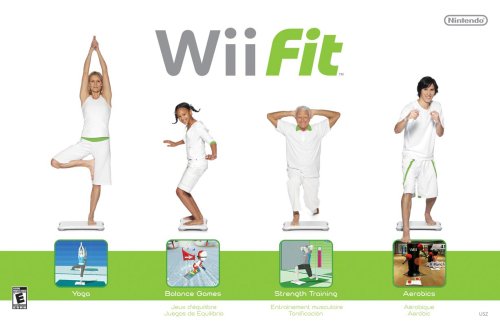 I’ve been “playing” Wii Fit for about a month now, so I thought I’d put up some updates on how it’s been coming along.

There have been some weird things happening occasionally when I play. For example, when I start up, the trainer will randomly be the dude (who has a slight Southern accent) and he’ll be like, “I’m filling in for your regular trainer today.” What gives? I need some eye candy while I exercise, not some dude!

Also, one day I got all the way through my workout and went to do the plank thing. After doing the plank thing my time reset to :01 minutes. It basically erased all of the previous things I had done. Not that it really matters. It didn’t erase the calories I burned (OR DID IT!).

As far as my health goes, I have lost a few pounds since starting, but not enough to reach my goal in time. So the game let me readjust my goal. I think previously I was trying to lose 5 lbs a week or something, which is kind of difficult.

I’ve also noticed a marked improvement in my strength. All those push-ups and stuff paid off. Which is to say I can actually do some push-ups now when before I just collapsed under the weight of my torso. My posture is probably improving as well.

So anyway, I think the fact that I have stuck with the Wii Fit stuff for a whole month is probably some kind of achievement. Maybe I’ll celebrate by eating a whole tub of ice cream. Oh wait, that WOULD erase all the work I’d done. Maybe I’ll just have some lowfat sorbet then…