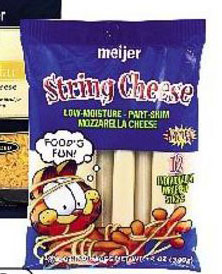 Meijer, the grocery store I usually frequent, uses Garfield the cat as a sort of product mascot. I hate Garfield. Garfield is probably the least funny comic in existence. The comics are so bad that removing all traces of Garfield makes them funnier.

So it’s strange to see Meijer use such a hated cat as a mascot. Personally, seeing Garfield on a product makes me want to buy it less. I used to like Garfield when I was a kid. It’s probably because back then, my brain wasn’t fully developed or something.

Anyway, I bought some Meijer String Cheese today. It’s pretty good, despite the existence of Garfield as a mascot.