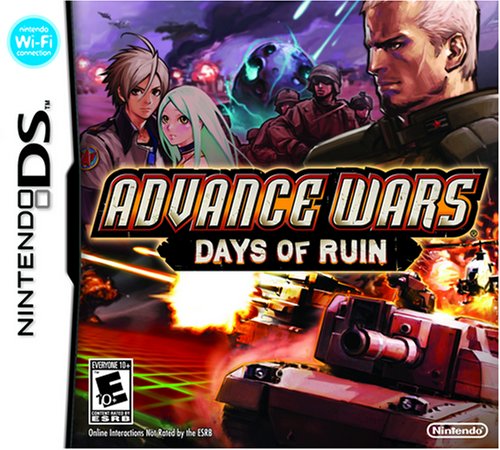 One thing that kind of seemed weird to me for the Advance Wars games was that the fighting always seemed unmotivated. Like here’s some random countries, let’s go to war! Also, the cartoony quality of the graphics led to some weird cognitive dissonance as I led my cute dudes with their tanks off to die in gruesome battle.

Days of Ruin sort of fixes this by making the graphics more gritty and changing the setting to a post-apocalyptic world. So everyone is fighting for food and survival instead of just for the hell of it. Unfortunately, the setting is not like Mad Max, where everyone is hoarding hockey pads and crossbows and gas. Seriously, you have factories that make tanks, but you can’t make food!? Get your priorities straight!!!

So far, it’s been pretty fun, but the challenge level just seems really low. I think I probably just need to complete some more missions and get further in the game.

« Filezilla: Update Whore MapsKrieg in a Mashup Contest – Vote For Me! »