This is Probably Slightly Unhealthy… 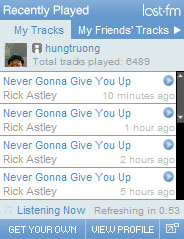 It all started as a joke. A RickRoll. Following a link like “Starcraft 2 leaked trailer!” and instead being presented with a video of Rick Astley’s “Never Gonna Give You Up.”

But you have to admit. The song is pretty damn catchy. You know, with the whole peak of the chorus at “say goodbye!” The mp3 version of this song is much better quality than the youtube encoding.

Also, this past week something legendary happened. The first ever “real life” RickRoll via singing telegram. In the long term this kind of internet meme crossover is dangerous (imagine a real life Goatse.cx or a real life flash thing with the ghost popping out at you), but I approve of the creativity of the real life RickRoll.