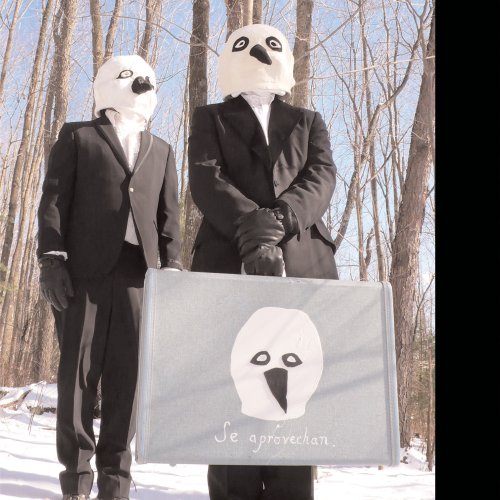 Whoa, so I just got The Else in the mail. And just in time, since the TMBG concert is tomorrow night! I had gotten psyched for it this weekend by watching the TMBG documentary, Gigantic. I guess I could’ve written about it too. Maybe I will later. But this is a review of the new(ish) CD! Tracks:

I think They Might Be Giants is trying to trick reviewers into giving good reviews of the CD by calling their first song “I’m Impressed.” And either by cognitive osmosis or pure wordplay, the reviewer will somehow work in the phrase into his/her review. This is a Linnell song, apparently. I just assume that whoever sings the song is the person who wrote it.

Umm… The actual song seems to be about a guy who’s impressed by natural disasters (like plane crashes and Godzilla attacks). But he’s also scared. I guess I’d give it a solid 7? Maybe a 6.

2. Take Out The Trash

This is a Flansburgh song. He’s petitioning for a girl to dump some dude. And it’s Thursday now.

This may be the best song of the album. It’s a Linnell. There’s this crazy frantic drumbeat underneath the calm guitar strumming. I like it!

Like all good TMBG songs, this one’s meaning can be left to interpretation. I think it’s about some dude getting dumped who seems happy about it. I guess he’s taken the oft-given advice to turn his frown upside down. The only problem is that obviously sad people who are smiling seem kinda sinister/crazy… I give it a 9!

This is a song about a dude who is way too high strung. But he’s found a good outlet for it: climbing the walls. I think that’s merely metaphorical, but what do I know?

This is a fairly typical Linnell song. By which I mean it’s really repetitive, except when we get a refreshing bridge! Like most Linnell songs, this one’s incredibly melodic. It’d work just as well without any backing at all. Which I think is a mark of a good song. Best line of the album: “I was grinding my teeth / I was wasting my youth / And using up my teeth.” I’ll give it a 7.5.

5. Careful What You Pack

Okay, this is the “Flansburgh sings like a girl” song of the album.

This song doesn’t make any sense, and it’s not fun to listen to. 3.

Is this song about Captain Crunch? No. It’s about a guy who likes to be called the “Cap’m.” Apparently people think you can’t be called that unless you drive a boat.

There’s nothing really striking about this song. It’s musical filler. It sounds like it was written in less than an hour. Which is bad, in this case. Especially given this is a Linnell song. I’d give it a 5.

John Flansburgh sings some harmony with himself in this song. But I think they’re questionable harmonies. At least this one’s sort of funky (by which I mean, there are some funky horns)!

There’s some nautical elements in this song, which make me think it might fit in with The Cap’m? The song is just all over the place though. I don’t like stupid all over the place songs!!! It seriously feels like they’re just making shit up as they go. 3.

Okay, so this song’s a little more cohesive and maybe even rockin’. It’s still a little random though (in the bad way). It uses the the quote “I doth protest,” though, so I can’t give it too bad of a score. 5?

9. Bee Of The Bird Of The Moth

This song is fucking weird. Which is good. Subject: Hummingbird moth who’s acting like a bird that thinks it’s a bee. The lyrics are really mind-numbing. A Linnell song, it’s once again fairly repetitive. But the funkyness and strange lyrics sort of redeem this song. I give it a 7.

This song is all about the buildup. It starts off soft, giving some exposition of sad sack and withered hope. I guess they’re characters, and not just anthropomorphic emotions. As the plot is revealed, the song really ramps up! And by plot, I mean new characters such as “soul mate,” “crook” and “motorbike” are added. It’s sort of a love pentangle.

Contrecoup had a lot of words that I had to look up. Which makes it good? Apparently this dude is too obsessed with science, including phrenology (analyzing a person’s character from their head shape) the science of being in love (Limerence!). He was hit in the head, which made him fall in love. Or something. Maybe he’s just a hypochondriac. Of love.

I like the idea, but the song itself (as a song) really isn’t that great. 6.

Feigning amnesia is a pretty good coping mechanism. What this dude is coping with, I’m not quite sure. It’s probably one of the better Flansburgh songs. But that’s not saying much. 5.

People think the Mesopotamians died out or something. In fact, they just started a traveling band.

This song is sort of like “We’re the Replacements” except with a dead civilization. It also sorta reminds me of those “band songs” where the bands sing about what they’re all about. Like “The Monkees.” It gets cleverness points, along with some “I guess it’s not a bad song” points. I’ll give it a 7.

Hmm. So the trend of me liking the Linnell songs and not liking the Flansburgh songs continues. I don’t really like any of the Flan songs, though most of the Linnell songs are at least decent. There’s probably 3-4 songs that I like on this new album. That’s still not very good, but it’s better than the 2 songs I liked on The Spine and the 0 songs I liked from Mink Car.

I had heard that this album was the best TMBG has released since Apollo 18. It probably is, but that’s not really saying much. I guess it’s nice that they’re slowly getting “better” since having hit rock bottom with Mink Car. I’m still waiting for State Songs Vol. 2 from Linnell…

« Banished From Boggle They Might Be Giants Concert @ The Mighican Theater! »