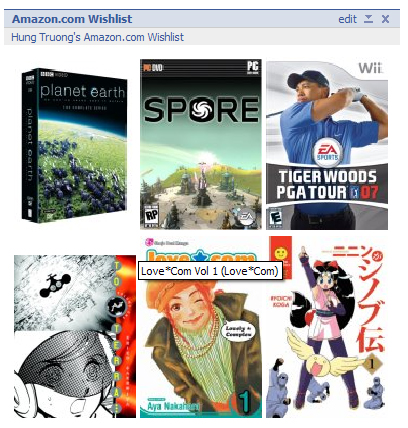 So I had the idea like two days ago to do an Amazon.com wishlist app for the newly opened Facebook Platform. I hadn’t done anything with either the platform or Amazon.com’s API, so I had a bit of looking up to do.

Still, I finished in about two days. Well, “finished” sort of, since I’ll be out of town for a week and I won’t be able to work on the thing until after that. The rest of the functionality shouldn’t be too hard though. It’s a pretty simple app.

Facebook’s API is pretty cool, but also kind of frustrating. There’s still a lot of limitations, but I guess I can understand those since it’s basically to keep Facebook from turning into Myspace. The API is somewhat well documented, but there’s a lot of bugs. Also, the developer forums seem to have about 80% script kids, and 20% actual developers. I think the saying “RTFM” should be changed to “RTFAPID” (Read The Friendly API Docs).

So yeah, if you have a Facebook account and an Amazon.com wishlist, try the app out and tell me what you think.