Punch Out on Wii Virtual Console! 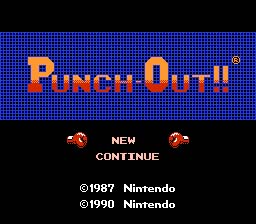 I’ve never bought anything using Wii Points before since I don’t really like the idea of micro payments. I mean, Nintendo should give us free NES games just for having a Wii, right? Anyway, when I was on the Wii Store channel today, I noticed that Punch Out was on the VC!

Punch Out is one of those games that I can still enjoy playing, even after like 20 years! I can’t believe it’s that old! I can’t believe I’m that old! Anyway, I used my credit card to buy some Wii Points and downloaded Punch Out! This is the version with Mr Dream, not Mike Tyson… Speaking of changes, I was on Wikipedia like last week looking at Punch Out stuff (totally unrelated). Apparently “Soda Popinski” used to be called “Vodka Drunkenski” in the arcade version. How awesome is that!?

I got to Bald Bull before I actually lost. That dude is a bitch. I remembered how to defeat his bull charge, but let’s just say I was a little rusty. I finally beat him, but then I couldn’t beat Piston Honda in the next league or whatever. I’ll try again later. I remember that when I was a kid, that was also the part I gave up. I guess some things don’t change…

Also, the new Wiimote isn’t the best controller to play Punch Out on, but it sure as hell beats the original NES controller. I like to call that old controller “The Blister Machine!” Seriously, it hurt.

I hope they release Super Punch Out for the SNES for the virtual console soon. That game was really awesome, too. Back in the days where all SNES games were prefixed with the word “Super!”