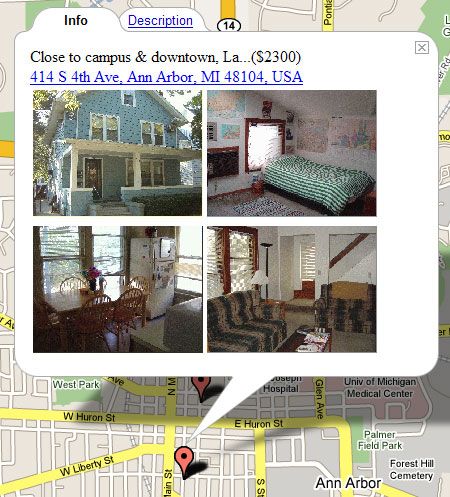 Today I made a bit more progress with my Craigslist Google Maps mashup thing. I setup the database table that handled the pictures for the listings, and added the images to the view as well. After that, I setup a new parser to parse the listings that can be found at the Michigan off-campus housing listings page. I’m not sure if I should make a separate page for these, or include them in the Craigslist listings…

I also came across a weird bug. When I ran the new Michigan parsing script by going to the page from a web browser, the thing would run fine, but after I uploaded to the server and ran it from the command line, it would flip out. It took me a really long time to figure out, but it turns out that I was calling a separate function by passing a value and not a reference.

I actually thought this might be a problem when writing the function, but when it worked, I forgot about the issue momentarily. The weird part is that the function works fine when you hit the .php file from a browser, and not when you run it from the command line. It must be some setting in the environment…

Besides that minor problem, everything seems to be going along smoothly. PHP has a lot of nice built in functionality for doing string manipulation, which this project has a lot of. It’s also got really nice networking and file reading capability. I guess that makes sense, since it originally came about as a tool for creating websites.

Tomorrow I’ll try to get the mashup site setup with actual options and navigation. Right now it’s just set on Ann Arbor. I’ll have to do some routing to get the many different options that people might want set up.